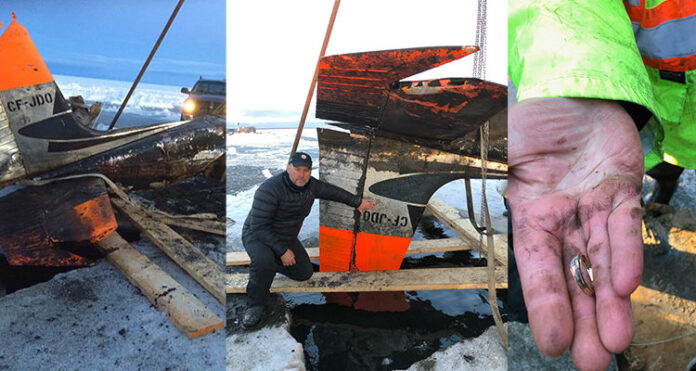 The story of Raymond Gran and Harold Thompson will never be forgotten.

Although the RCMP indicated earlier this year it had no plans to recover the Cessna 180 the two men occupied when it crashed into the murky depths of Peter Pond Lake near Buffalo Narrows way back in August 1959, the Saskatchewan Aviation Museum and Learning Centre couldn’t let sleeping dogs – or, in this case, sleeping planes – lie.

“I’m looking at the plane right now – it’s about 50 yards away from me,” remarked Dorrin Wallace, president of the Saskatchewan Aviation Museum, when contacted by Northern Pride Monday.

Given the fact it wasn’t a recent crash, the police were content with leaving the plane at the bottom of the lake after recovery efforts conducted in late January resulted in the discovery and procurement of human remains and personal items belonging to Gran and Thompson. According to Wallace, however, the plane itself was too important to be left behind.

“When we learned about the initial discovery of the plane under the lake last summer, we began working closely with the Kapusta family (Linda Kapusta is the daughter of Raymond Gran) and it became the goal of the museum to find the plane and restore it to what it used to be,” he said.

“We’ve never had a Saskatchewan Government Airways plane in our collection, and they are a big part of local aviation history,” Wallace noted. “When the RCMP did their dive earlier this year and were able to get the remains out, I began talks with the Kapusta family and things just got going from there.”

The plane was ultimately pulled from the water last Thursday (March 28) thanks to the efforts of professional divers, a crew from the museum itself and local residents from Buffalo Narrows, Dillon and Michel Village eager to close the chapter on the nearly 60-year-old mystery once and for all.

“They got the plane out around 5 or 6 p.m. Thursday and it arrived here at the museum Friday,” Wallace said. “It didn’t take too long to pull it up once we got hooked on to it. Everyone did a tremendous job and we can’t thank them – especially the local people – enough for all their help. It was a very emotional time for everyone, especially the families.”

This was especially true when Gran’s wedding band was discovered. His wife, Marcella, passed away last year, so the ring was given to his daughter.

The plane, meanwhile, will now be displayed at the museum in its current state for the next year or two while efforts continue to find the money and the parts needed to restore it to its original glory.

On Aug. 20, 1959, the plane, piloted by Gran and carrying Thompson – a Department of Natural Resources officer – was bound for La Loche from Buffalo Narrows when it crashed. Those who remember that day described conditions as foggy, and even though an extensive ground search and and a dragging operation on the lake were conducted at the time, no trace of the plane was found.

Thompson was born in 1932 in Tisdale, SK. He joined the Department of Natural Resources in 1955 as a trainee and graduated as a conservation officer in 1957. He was stationed in Dorintosh, Meadow Lake, Uranium City, La Loche and Buffalo Narrows. Following the plane crash, Thompson’s name would be perpetuated, as a peninsula on the lake was named Thompson Peninsula. Gran and his wife, meanwhile, were expecting their first child (Linda) at the time of his death.

Kapusta went on to say finding her father’s wedding band made the entire effort extra special and very worthwhile.

“My father’s wedding band is the most personal and special item recovered for me and it was truly a touching moment for all those on site when the ring was recovered,” she said. “We are truly grateful to all the individuals along the way that made this project a complete success.”