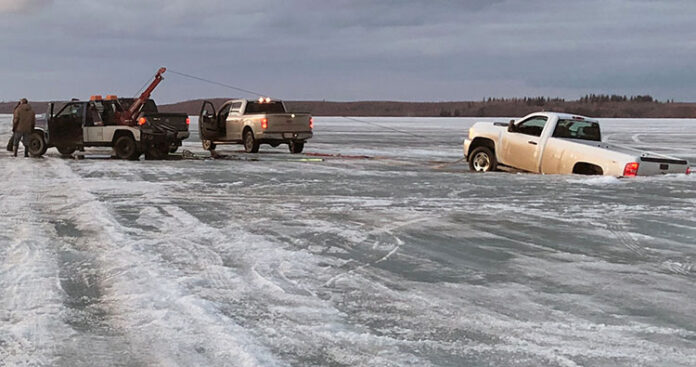 Get the truck off the ice.

That’s what both the RCMP and conservation officers with the provincial Ministry of Environment are asking the public to do in the wake of warm weather last week that has resulted in weak spots in the ice covering lakes and other bodies of water throughout the Northwest.

“Loon Lake RCMP did get several reports on the weekend of vehicles going through the ice on different lakes in the area,” explained Loon Lake RCMP Sgt. Ryan How. “Reports are the ice is still very thick, but due to flood waters and other factors it simply isn’t strong enough to support a vehicle. Luckily no one was injured.”

How went on to say it appears the lake ice is just not as strong as previous years and, even though it’s still more than 24 inches thick in places, on certain lakes it’s not safe to drive on.

This was echoed by conservation officer Daryl Minter who said, although he can’t give an exact number, several vehicles did break through the ice and fall into the water at different locations this past weekend.

“It’s around this time of year when the ice starts to give out,” he said. “We experienced some warmer weather last week and, even though things got a little cooler this week, the ice has decreased in thickness somewhat in some places. Conditions just aren’t good for being on the ice right now, especially with vehicles, so anyone who does venture onto the ice needs to be very cautious.”

Minter did confirm two incidents of vehicles falling through the ice on Makwa Lake recently, which has resulted in the ministry placing barricades at the boat launch in Loon Lake.

“That’s the only actual posting we’ve done advising people to stay off the lake, but it’s still not a good idea to be on any frozen body of water at this point,” he added. “A lot of ice erosion is taking place, while the ice thickness depends on the weather as well as surrounding conditions. Thickness can vary from one place to another meaning it’s risky to be on the ice anywhere. With that being said, just be careful.”

According to Environment Canada, the temperature hovered around the zero mark this past Tuesday (April 2), but is expected to warm up to a high of 4C today (April 4) before hitting 11C Sunday and 13C Monday.