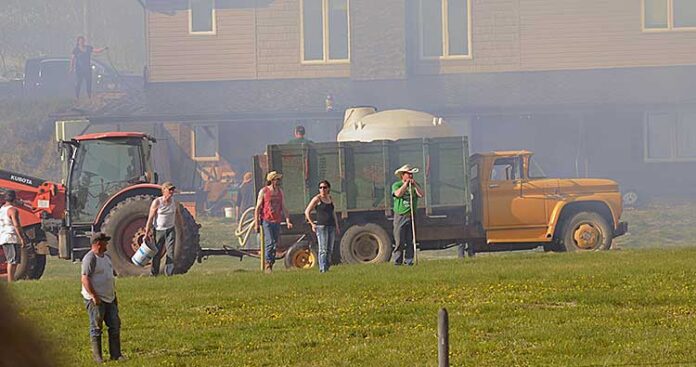 Early this afternoon (Monday, May 20), not one, not two, but three wildfires ignited throughout the RM of Meadow Lake and, as of 7:30 p.m. today were still out of control.

The first blaze broke out around 1 p.m. on an acreage located about eight miles northeast of Meadow Lake, just west of the Meadow River. According to neighbours one home was lost, while others were threatened.

The second fire, which was spotted about 90 minutes later, heated up just east of Highway 4, approximately 12 kilometres northwest of Meadow Lake. Several homes along the highway were reportedly in harm’s way.

Meanwhile, a third fire started around 4 p.m. closer to the site of the original fire. Eye witnesses believe it was caused by embers from the first blaze, which a strong wind caused to blow west more than a half-mile.

Meadow Lake Fire and Rescue responded to all three fires, while water bombers as well as many neighbours also provided assistance.