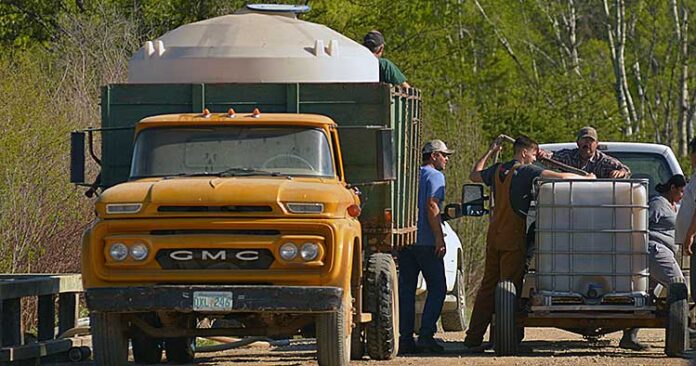 On Monday afternoon (May 20), not one, but two fires broke out in the RM of Meadow Lake and, as of this week’s news deadline, suppression efforts continued at both locations.

“We responded to two fires, although they were both so widespread there may have appeared to have been three,” explained Meadow Lake fire chief Neil Marsh.

The first blaze broke out around 12 noon on an acreage located about eight miles northeast of Meadow Lake just west of the Meadow River.

“On arrival, we found the fire had extended beyond the original structure and had become a wildfire,” Marsh continued. “The fire was spreading rapidly to the north, threatening numerous other acreages and ranches in the area.”

According to neighbours a mobile home was lost, while a number of area residents banded together to protect other homes in the area that were threatened.

“I am not sure who owns the mobile home lost in the fire, but I do know they got out safely,” explained nearby resident Karissa LaBrash. “The fire had spread south to one neighbour and then it also mainly went north and threatened at least five other homes or properties. Our property was one of the five.”

According to Meadow Lake’s Alicia McWatters, the mobile home belonged to her son, Cole Murray, and his girlfriend, Tiffany Kennedy.

“They got out in the nick of time, thank God,” McWatters said.

LaBrash said a large group of neighbours, as well as others from all over the area showed up to help out with all types of water supplies and various equipment.

“Some stayed well into the night,” she said. “Water bombers as well as multiple volunteers with the fire department were fighting the fire as well. Without all this help, we and others likely would have lost our homes. We truly can not thank these people enough.”

Among those to help was area resident Len Timmer.

“With the pace of our lives these days, we don’t spend time with our neighbours like the generation before us did, so it was pretty amazing to be part of such a community effort,” Timmer said. “I know no matter who is in trouble, the response will be the same next time. I just hope there is no next time.”

The second fire – which started as a grass fire – was initially spotted about 90 minutes later. It ignited just east of Highway 4, approximately 12 kilometres northwest of Meadow Lake. Several homes along the highway were also reportedly in harm’s way.

“A lot of family, friends and neighbours showed up to help protect these homes,” explained area resident Lloyd Esau who lent his assistance Monday afternoon. “A lot of help arrived very quickly… In times like this everyone really appreciates how people come together to help.”

As noted, the provincial Ministry of Environment was also alerted to the fires.

As of Wednesday, there were nine active wildfires in Saskatchewan; four were contained, four were listed as ongoing assessment and one was not yet contained. There have been 73 wildfires to date this year, compared to the five-year average of 129 fires as of this date.