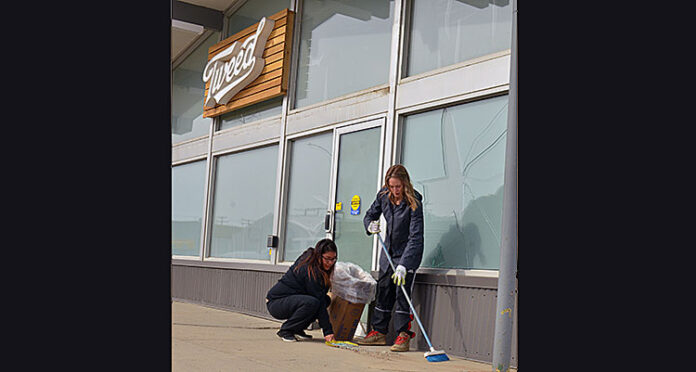 The new Tweed store in downtown Meadow Lake has yet to open its doors to customers and it appears as though at least one individual is getting tired of waiting.

The retail cannabis outlet at 101 Centre St. had one of its front windows smashed some time during the early morning hours yesterday (May 1). According to the Meadow Lake RCMP, security camera footage shows a male youth approach the store and break the window with his fist before walking away.

The suspect is believed to be involved in several other incidents recently reported to police. He has been identified, but cannot be named under the Youth Criminal Justice Act. A warrant was issued for his arrest.

Pictured here, Tweed’s assistant manager Allie Snyder sweeps the glass shards into a dust pan held by shop lead Juliette Prosper. Jennifer White, senior communications advisor with Tweed’s parent company Canopy Growth Corporation, said the opening of the Meadow Lake location has been pushed back while the company awaits the necessary permits. The opening is now anticipated for May 17.