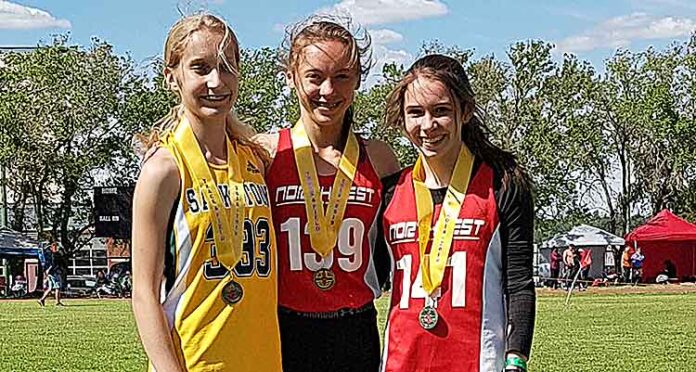 Records were made to be broken.

Not only did Carpenter High School Grade 10 athlete Avery Pearson capture two gold medals and a silver at this past weekend’s Saskatchewan High Schools Athletic Association (SHSAA) provincial track and field meet in Moose Jaw, she also set a new record in the SHSAA’s provincial Junior girls 800-metre run when she clocked in at 2:12.22. The previous record of 2:14.7 was set by Jane Bolstad of Regina back in 1979.

“I went into provincials not knowing what the record was for the 800-metre, but once I learned I could potentially break that record I did what I could to stay focused on that goal,” Pearson said.

Pearson earned her second gold of the weekend in the 800-metre run Saturday (June 8). The previous day, she won her first gold when she placed first overall in the 1,500-metre run with a time of 4:39.27.

“In that race, Avery ran right behind Jenna McFadyen of Maidstone until about the 900-metre mark,” explained CHS track and field coach Laura Dawson. “With only 600 metres left in the race she took the lead. There were three bends left at that point and, with about 200 metres to go, she kicked it into high gear, increasing her lead. Not only did she win gold, but she also earned a personal best.”

Friday also saw Pearson win silver in the 400-metre run with a second-place finish and a time of 58:07.

“I’ve worked really hard the last month or so to prepare myself for provincials,” Pearson said. “It’s a very difficult sport. It takes a lot of physical strength and mental toughness to be able to put your body through that sort of strain. I feel my hard work has paid off and I am happy to achieve this success. I’m very proud of what I have accomplished and super excited to bring more provincial banners to Carpenter High.”

“To watch these athletes compete is inspiring,” Dawson continued. “The amount of power, strength and mental preparation that goes into what they do is remarkable. They all worked really hard and made our school proud.”

In addition to Carpenter High, several other schools from throughout the North also competed at the SHSAA provincial track and field meet.

Representing Ernie Studer School in Loon Lake was Nicholas Ecker who finished 22nd in the Junior boys shot put with a throw of 10.02 metres, while Rico Opikokew of Canoe Lake was 18th in the Senior boys 800-metre with a time of 2:19.07, and Tishawna Singer of Big Island Lake First Nation’s Chief Napew Memorial School was 10th in the Senior girls discus with a throw of 25.15 metres.