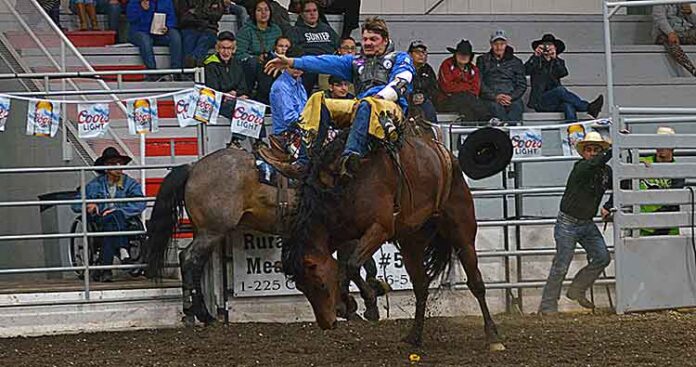 “The excitement is building.”

With the 99th annual Meadow Lake Stampede now in the record books, that’s what Meadow Lake Stampede Association president Leighton Wood and other organizers of the local event are feeling with now being faced with both the honour and the pressure of planning the big one – the 100th anniversary scheduled for 2020.

“Nothing is concrete just yet, but we will be putting our ideas on the table and will start making plans from there,” Wood explained. “I do believe, however, the excitement of looking forward to the 100th anniversary is what made this year’s event so successful. This was probably one of the best events we’ve ever had in terms of attendance at Friday and Saturday’s (June 7 and 8) rodeo as well as the dance Saturday night at the Civic Centre.”

Stampede Week kicked off June 3 with the annual western parade that attracted more than 70 floats and wound its way throughout the community much to the delight of onlookers of all ages. The following day marked the annual District 36 4-H Show and Sale, while Thursday night saw another large crowd converge on the Meadow Lake and District Arena to witness the Tuff ‘n Up Bull Riding Challenge, presented by Eagle Creek Motors, action that featured 30 of the best riders from Canada, Brazil and Australia. Two local favourites were Arlan Lumgair and Cody Coverchuk. This year’s winner was Shay Marks of Sunnybrook, AB.

As Wood noted, the rodeo – sanctioned by the Lakeland Rodeo Association – took place at the arena Friday and Saturday and featured traditional rodeo events such as bareback and saddle bronc riding, tie-down roping, steer wrestling, lades barrel racing, junior bull riding, team roping and bull riding. Other popular attractions at the rodeo itself included local calf riding, local steer riding, local barrel racing, a kids’ boot scramble, as well as a Frisbee toss where each night a lucky youngster was fortunate enough to take home a brand new bike. Meanwhile, throughout the week, Tornado, the mechanical bull, made a few stops throughout the community so would-be bull riders could give the sport a try ahead of the fun that was still to come.

“Everything ran so smoothly,” Wood said. “We had more people come forward to volunteer during the setup, during the event as well as the tear down. The support from the community was overwhelming. When you have that level of support it really makes it fun to organize these sorts of events. A special thanks has to go out to all of our sponsors and to the community as a whole for making this year’s Stampede another success.”