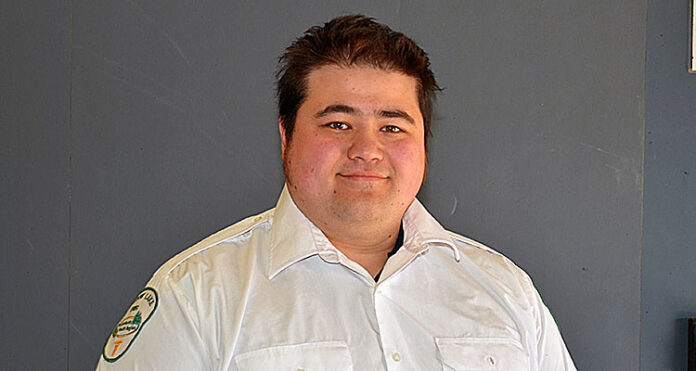 When Frank Richardson became a paramedic five years ago, fame and recognition were the furthest things from his mind.

However, Richardson found himself in the spotlight recently when, on May 30, he was presented with the Saskatchewan Star of Life Award at Government House in Regina.

“I am very honoured to receive this award, but that day wasn’t all about me,” Richardson said. “A number of other people also received awards for bravery and for their actions during extenuating circumstances. Many of the first responders from last year’s Humboldt Broncos bus crash were among those in attendance, and to be recognized alongside them was a true honour. When it comes to the work we do, you never think about being recognized. In my case, I just did what I would expect anyone to do in the same situation.”

During the ceremony, emcee Lyle Karasiuk explained how, last year, Richardson put himself in harm’s way to subdue a man who threatened to kill himself and a baby he was holding. Richardson was able to safely subdue the assailant and had him release the baby. The mother and baby were able to run to the hospital for safety. Karasiuk also noted how the RCMP reported, had Richardson not intervened, it is their belief serious harm or death would have come to both the man and baby.

“Frank is the type of guy who will always go above and beyond,” stated Meadow Lake RCMP Cst. Jonathan Griffioen who recommended Richardson’s name be put forward for the award. “I have been in Meadow Lake for four-and-a-half years and have worked closely with Frank so many different times. He always shows compassion for people – he’s a stand-up guy who will do whatever he can to help others. If Frank hadn’t stepped in during this incident it could have ended up a lot worse than it did. That’s why I’m happy to see him receive this award. It’s been a long time coming.”

In a recent social media post, Richardson’s wife, Bridget, shared how proud she is of her husband.

“I am so proud of my strong, selfless husband,” she noted. “If you see him, please congratulate him. It will embarrass him, but he deserves it. And, if you see a paramedic this week or ever, stop them and thank them for what they do every day as front line workers.”

The Saskatchewan Emergency Medical Services Association’s (SEMSA) Star of Life Award recognizes outstanding achievement, dedication or leadership in EMS. It is presented for acts of bravery, heroism above and beyond the call of duty, excellence in leadership, program development or a high standard of excellence in EMS.