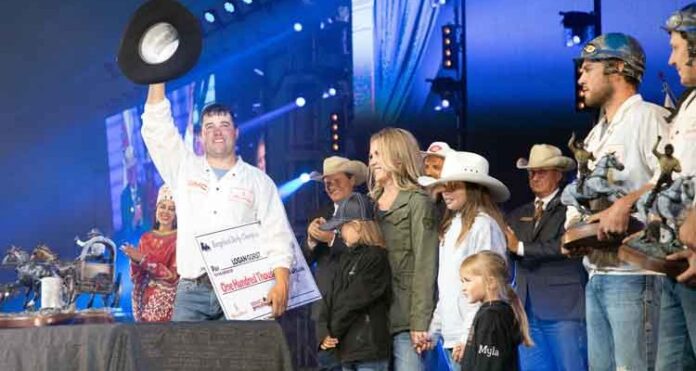 Meadow Lake’s Logan Gorst has made his family proud.

This past Sunday (July 14), Gorst – a driver with the World Professional Chuckwagon Association (WPCA) – captured the top prize at the world-famous Calgary Stampede when he, along with outriders Casey Knight, Chance Flad and Brendan Nolin, emerged victorious in the championship final. It was an historic night, not only for Gorst but for chuckwagon racing in Saskatchewan as well, as it marked the first time all four drivers featured in the final were from this province.

“Getting the family name into the history books means more to me than you could imagine,” Gorst told Northern Pride. “I owe it all to my family and to my horses, The horses performed phenomenally and did absolutely nothing wrong the past 10 days.”

Gorst, who also had the fastest aggregate time at the Stampede, went on to win the championship dash from barrel number one by 43 one-hundredths of a second over Todd Baptiste of Cando, SK who placed second from barrel number three. Luke Tournier of Duck Lake, SK placed third from barrel position number four, while former Rapid View driver Vern Nolin ended up placing fourth from barrel position number two. On the night, Gorst’s championship run of 1:10.87 was also the fastest time, 42 one-hundredths of a second better than Kris Molle of Watson, SK. Baptiste placed third, followed by BJ Carey of Lloydminster and Tournier filling out the top five on the final night of competition.

“It was a tremendous improvement over last year where I made it to the semi-finals, but missed out on the $100,000 dash,” Gorst said. “Two years ago I made the dash, but things didn’t work out so well for me (Gorst received a five-second penalty for knocking over a barrel). I’m so happy I got the chance to redeem myself.”

While Gorst’s family, particularly his father, Gary, and grandfather, Art, competed at the Calgary Stampede for many years, this is the first time a Gorst has actually won the big one.

“I know this was a very special moment for them and for Meadow Lake as a whole,” Gorst continued. “Again, I owe it all to them. My dad and my grandpa were doing this as far back as the early 1970s. Our family name has been a part of chuckwagon racing for a long time and they have taught me how to take care of the horses and about making the horses feel good. Without them I wouldn’t be where I am today.”

Another family dynamic to Sunday’s final is the fact Tournier is Gorst’s father-in-law.

“I was really worried going up against him,” Gorst admitted. “Actually, I was concerned about all the other drivers. Vern is currently first in the WPCA standings, which tells you how tough he is. You also can’t count Todd Baptiste out and Luke, well, I was for sure sweating a lot going into the final, but had enough speed to hold them off.”

Gorst also acknowledged the ongoing support from members of the local community.

“I’ve received so much support from so many people,” he said. “The number of texts, phone calls and other messages I received after the win was nothing less than incredible. While replying to one I would receive about seven more. It just goes to show how much support and how much interest this area has when it comes to chuckwagon racing.”

Although he grew up around the sport, Gorst didn’t officially become involved with chuckwagon racing until 1997 when he began his career as an outrider. He actually helped Tournier win Calgary a couple of times in that role, but soon got the itch to see if he could achieve the same as a driver. He started with the Canadian Professional Chuckwagon Association (CPCA) where he competed for four years before moving to the WPCA where he has been for the past eight seasons.

“Calgary is under my belt now, but I will continue to work toward winning a few more there again,” Gorst said. “Another goal I have is to win the Ponoka Stampede, but I came up short this year so that will have to wait until next season.”

Gorst was second in the Ponoka dash, finishing four one-hundredths of a second behind champion Nolin. However, in addition to being the aggregate champion in Calgary and winning a new truck for having the best time over eight nights, as well as the $100,000 dash, Gorst also received the Calgary Stampede’s Safe Drive Award for being the least penalized drivers over the first eight nights of the Rangeland Derby.

Sunday night also marked the final Calgary Stampede for CPCA driver Ray Mitsuing of Makwa Sahgaiehcan First Nation who will be retiring at the end of this season.

“It’s hard to explain how I felt out there other than to say it was kind of emotional,” Mitsuing said. “It’s tough to think about it being your last time on that track after having been there for 36 years. Still, I had a good Stampede and, if I wouldn’t have hit a couple of barrels, I could have been right there in the final.”

He never did win Calgary throughout his career, but Mitsuing first made the final four dash in 1988 and was there three times since. In 1992, he won the Stampede aggregate – the best total time (penalties included) over the first eight days – which now awards the winner a new truck and the Richard Cosgrave Memorial Trophy.

While his dreams for Calgary may now be in the past, Mitsuing went on to say he is looking forward to the rest of the season (the CPCA will be in Little Pine, SK July 19-21), but his focus now shifts to helping his son, Dale, improve as a driver.

“The goal now is to help get Dale to the Calgary Stampede – that’s what I am aiming for,” he said.