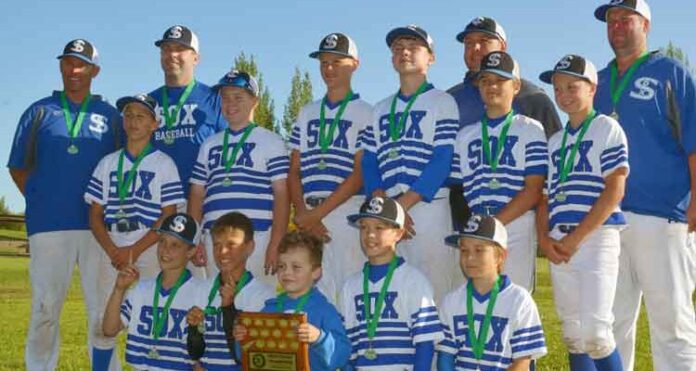 The Meadow Lake 13U Sox had one goal in mind when they started the 2019 season and that was to win a provincial championship. They were not disappointed.

This past weekend, the Sox were crowned 13U Tier 2 provincial champions following an eight-team tournament held at Lions Park, downing the Assiniboia Southern Aces 14-6 in Sunday’s final.

“Assiniboia is a very strong team,” remarked Regan Beck, one of four coaches for the Sox team. “We actually saw them earlier in the year in Muenster and were fortunate to beat them. So, we knew coming in they would be good. They’re well coached and they’ve got some real talent there. We knew it was going to be a dog fight… they’re just a really nice team and good bunch of guys to play against.”

The tournament kicked off Friday evening with four games as well as opening ceremonies. The action continued throughout Saturday and wrapped up Sunday in spite of Mother Nature’s best efforts to rain on everyone’s parade. In round-robin play, Prince Albert claimed the top spot in Pool ‘A’ with Foam Lake taking second. The Yorkton and Lloydminster teams failed to make the playoffs. In Pool ‘B’ Meadow Lake finished first with three wins while Assiniboia grabbed second. The other two teams in Pool ‘B’ were Esterhazy and North East. In the semi-final matchups, Meadow Lake downed Foam Lake while Assiniboia got past Prince Albert.

“We went undefeated in our pool which set us up nicely for Sunday,” Beck continued. “It was a real tough pool. When we first saw the draw we saw Assiniboia and North East on our side, two very strong teams. On Friday night we defeated Assiniboia 7-4, we were able to mercy Esterhazy Saturday morning and then, Saturday night, we also mercied North East. That saved us a lot in the pitching department because we didn’t have to go too far. Coming in Sunday morning we met Foam Lake in the semi-final and, I have to give them credit, they can really hit the ball. That led us to the final, which, again, we knew would be a tough game. But, it seems our boys play better when they know it’s going to be a tough game. It gets them a little more jacked up.”

This was echoed by fellow Meadow Lake coach Clint Pigott.

“This is my third year with this group,” Pigott noted. “They’ve really come along and really developed both physically and emotionally as ball players. Our goal at the start of the season was to win provincials and we did it. The last two years we’ve been in the finals and both times we’ve come up just a bit short and won silver. Winning it this year at home was extra special.”

In the championship final, Assiniboia got on the scoreboard during their first at-bat, but Meadow Lake rallied to tie the game 1-1 in the bottom of the inning when Noah Pigott scored from third on a passed ball.

In the next inning Assiniboia had success in loading the bases, but Sox pitcher Ryder Ellis came through with a big strike out to end the inning and the visitors’ threat.

With the team pumped up, Meadow Lake’s bats came alive in the bottom of the second when Caleb Pockrant, Brandt Spencer and Dawson Gerwing all cashed in doubles finding holes throughout Assiniboia’s infield. When the dust settled, Meadow Lake added six runs – and the barrage was shut down due to the six-runs scored maximum rule per inning. Meadow Lake now enjoyed a comfortable 7-1 lead.
In the third, Assiniboia managed one run while the local Sox responded with three.

However, in the fourth, Assiniboia showed life again by loading the bases and scoring three runs to cut the lead to 10-5. With the bases loaded again and two out, Ellis got himself out of a jam by getting the third out with a strike out.

In the bottom of the fourth, Pigott made contact for a single and then Ellis cracked a two-run homer and then the Sox added two more for a 14- 5 lead.

In the fifth, Assiniboia would score once more, and later in the sixth and final inning, new Sox hurler Dawson Gerwing shut down Assiniboia for a 14-6 final.

Trevor Peterson, head coach of the Assiniboia squad, also shared his insight on the Meadow Lake team and the tournament overall.

“Meadow Lake had three good chuckers Sunday,” he said. “It’s hard to beat a team with that kind of pitching. The team is well coached – I’ve played against a few of them and they know their baseball. The team has a good surrounding cast as well and the bottom of the order hits the ball well. The facilities here are superb. When we first arrived, I was impressed with what I saw.”

As for the weather, Beck said everyone pulled together to ensure Sunday’s games would go ahead as planned.

“It was a little hairy at first,” he said. “I woke up at 4 a.m. Sunday and heard the wind and the rain on my window. But, it’s pretty amazing the volunteer base we have here. I arrived at the park at 6 a.m. and I was the fourth guy to get there. That’s Meadow Lake for you. We knew when the rain stopped we could get out there and harrow the diamond. We harrowed it for four hours and everything worked out. The volunteers were amazing, we had great crowd support and tremendous business support, so we’re extremely happy.”

Next season, five of the 13U players – half of this year’s roster – will advance the the Bantam level – while five will remain in Peewee.