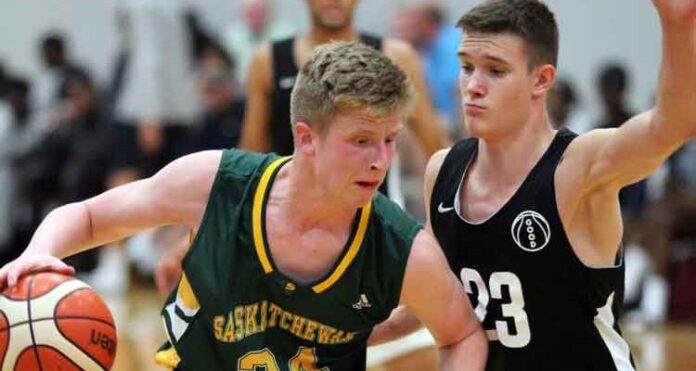 A Meadow Lake athlete representing Team Saskatchewan this summer in the sport of basketball is Drew Ackerman.

Ackerman has competed in three major tournaments since joining the squad this year and will head to Fredericton, N.B. next week for the Canada Basketball 2019 U17 National Championships.

“It’s been a great experience thus far,” Ackerman told Northern Pride. “It’s made me a better person off the court and a better basketball player on the court.”

Earlier this summer, Ackerman and his teammates competed at tournaments in Calgary and Edmonton where they won gold and silver respectively, as well as at an event in Spokane, Washington where they lost in the quarterfinal to a team from Japan.

“He’s had an outstanding summer,” noted Ackerman’s father, Greg Ackerman. “Drew also qualified for the 15U and 16U teams in past years, so he knows a lot of his teammates and has developed friendships with many of them.”

Drew Ackerman, who will return as a CHS Spartan when he enters Grade 12 this fall, said he is excited to compete at nationals.

“It will be my first time visiting the Maritimes,” he added. “My former CHS coach, Nav Burke, has been helping me out along the way and I know we’re going to play our best and, hopefully, we can come home with a gold medal. I think we can do it.”

Greg Ackerman, who will be in attendance for the tournament, is equally as optimistic.

“We look forward to some great competition,” he said. “It’s going to be some excellent, high-calibre basketball. Hopefully they can capture a national championship.”