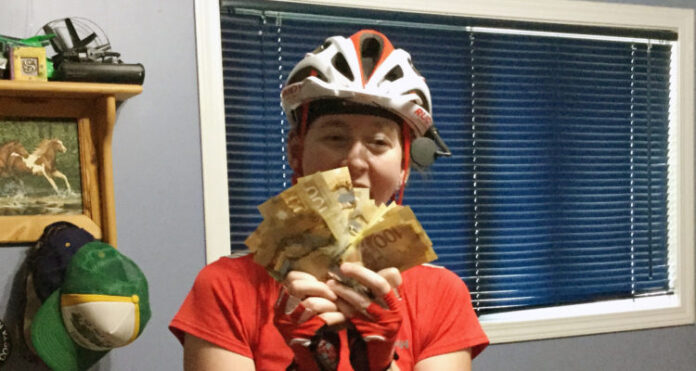 What started as a routine bike ride from Dorintosh to Meadow Lake for cyclist Crystal Ricalton turned out to be anything but.

One day last week, just as she was entering town around 4 p.m., Ricalton – who lives in Dorintosh and works at Northland Pioneers Lodge in Meadow Lake – came across a large sum of money lying on the side of the road.

“I was cycling on Highway 55 and, just as I came around the speed curve on the way into Meadow Lake, I came across what looked like a bunch of papers lying on the ground,” Ricalton said. “I almost passed right by it, but then something else caught my eye. I thought I saw what appeared to be money, so I turned back and, sure enough, there was a $100 bill sticking out from where the grass meets the concrete.”

Upon further investigation, Ricalton discovered a book lying on the ground nearby filled with receipts and other important paperwork. She also found more money lying throughout the immediate area.

Using information found within the book, Ricalton was able to track down its owner. Later, when cycling back to Dorintosh, Ricalton came across the owner and his family searching for the remainder of the money.

The owner was identified as Scott Gobert of Scotty’s Mechanical.

“It was awesome to know an honest person found the money and returned it to me,” Gobert said. “I don’t know what else to say other than I’m happy there are still some good people in the world.”

Ricalton cycles to and from Meadow Lake and Dorintosh quite regularly, but said this is the first time she’s made such a unique discovery.

“I find a lot of things along the side of the road – including two phones one time – but never anything like this before,” she said.