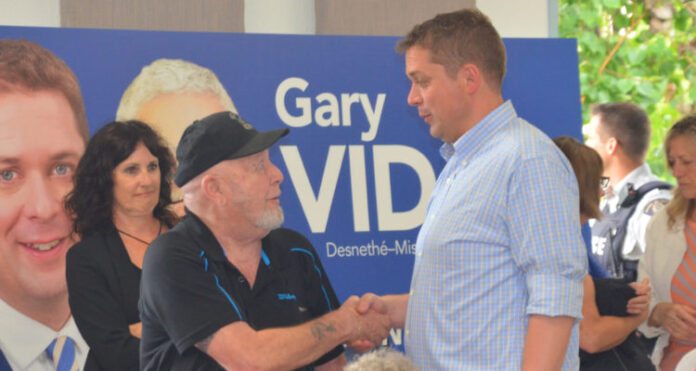 If supporters of former Meadow Lake mayor Gary Vidal have their way, it won’t be a wave of Conservative blue that overtakes the Desnethé-Missinippi-Churchill River riding Oct. 21 but rather a tsunami.

In addition to personally greeting those in attendance and posing for several photo ops, Scheer publicly addressed the audience, noting his party’s plans for Canada if successful come this fall’s election. Scheer promised, if he becomes Canada’s next prime minister, efforts will be made to repeal the carbon tax, to stand up to China for its decision to block canola exports and to make Canada self-sufficient in terms of oil and energy production. In a subsequent interview, Scheer spoke candidly with Northern Pride about his familiarity with Meadow Lake and the surrounding area.

“It’s a fantastic community,” he said. “I know it’s gone through some growth periods recently and that’s exciting. I’ve known Jeremy (Harrison) for many, many years. He’s had me up here before to enjoy some of the natural beauty around Meadow Lake. My riding around the Regina area is 50/50 urban and rural, so about half my riding is full of communities very similar to this one. I’m very aware of the issues facing this community.”

Scheer also said he was quite pleased with the strong turnout for Thursday’s event.

“This is great,” he said. “There are a number of families here tonight, a lot of kids here with their parents. It’s a great crowd of all different ages and backgrounds, and I am very encouraged by it.”

Vidal was officially selected as the Conservative candidate for Desnethé-Missinippi-Churchill River last October and, according to Scheer, he’s the right person for the job.

“I know Gary is a hard working entrepreneur,” he noted. “He has great experience on the accounting side and, after four years of a Liberal government, we’re going to need some more accountants, people who actually know how to add up numbers. It will be really great to have him, but most importantly the people from this riding have not had their interests represented. This riding has a member of Parliament right now (NDP MP Georgina Jolibois) who votes against Saskatchewan, who doesn’t stand up against the carbon tax, who doesn’t stand up for energy development, for pipelines, for the forestry sector and I know people are frustrated about that. Winning this seat will get us one step closer to forming a Conservative government nationally and that’s what the people of Saskatchewan know we need. In order to solve the problem between the federal government and the province we need a Conservative government and that means we need to get this seat back. We’ve held it before and I am confident we can gain the trust of the voters in this riding again.”

According to Vidal, Thursday’s event was only part of an excitement-filled day.

“Today’s been great,” he said. “We started in Prince Albert this morning and then moved on to Debden and Big River. We had great turnouts at all these places – there’s a lot of enthusiasm, a lot of energy and a lot of people supporting the positive vision Andrew is talking about and the positive vision for change in our country. It’s just been a wonderful day.”

Vidal also said it was exciting to have the party leader visit the riding.

“We know his time is very valuable and resources are being stretched, but we’re thrilled to have him here because it’s a great encouragement for all our people who continue to help out,” he said.