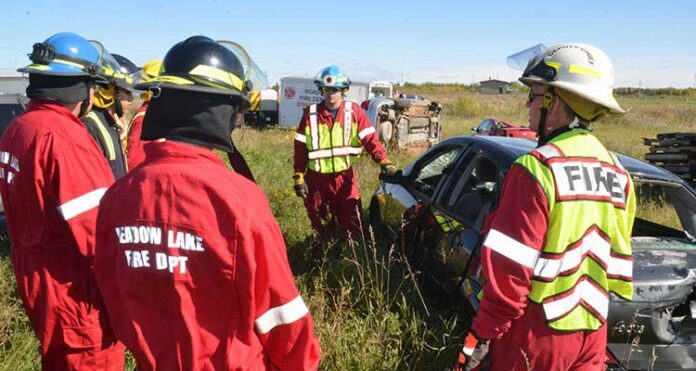 There’s more to Meadow Lake Fire and Rescue than simply putting out fires.

“We want to become more of a training ground for fire departments and fire brigades throughout the Northwest,” explained Meadow Lake fire chief Neil Marsh. “There is definitely a need for something like this. Our department as well as others often have some of our people head south each year for training put on by the Saskatchewan Volunteer Firefighters Association, but it’s sometimes difficult for some people to get away for something like that. That’s why we decided to hold something similar here in the North.”

“There was quite a bit of interest,” Marsh said.

Training included basic vehicle extrication, as well as an introductory fire inspection course. Marsh said he would like to expand on the number of courses offered in future years, something he believes will attract even more participants.

“There are a number of essential skills firefighters always need to work on,” he said. “And, by holding something like this in Meadow Lake, it’s good for local business and for local tourism. It also allows our in-house, qualified instructors an opportunity to utilize their skills. The goal is also to help make Meadow Lake a regional hub.”

According to Ile-a-la Crosse fire chief Jordan Corrigal, having training opportunities offered closer to home allows for more firefighters from his community to participate.

“The main thing about this training is it improves our members’ skills and helps them gain more confidence when it comes to using certain equipment when an emergency situation does arise,” Corrigal said. “A lot of our guys don’t want to travel far from Ile-a-la Crosse, so having this sort of programming available in Meadow Lake is not only much more cost-effective than sending people to the big city, but it also allows more people to simply drive down there and take part for a day or two.”