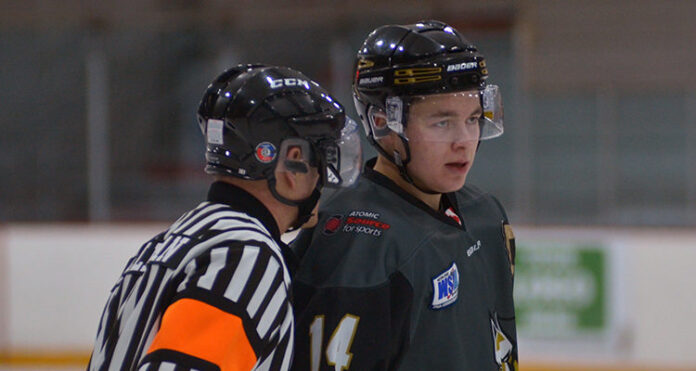 The La Ronge Ice Wolves of the Saskatchewan Junior Hockey League (SJHL) have finished up exhibition games, and have trimmed their roster.

“We’re down to 27 players now,” remarked Ice Wolves head coach Kevin Kaminski. “We had about 75 guys show up to our initial training camp and, after cuts, we’re down to 32.”

Among those to be recently released from the team is Meadow Lake’s Shane Hounsell. The soon to be 20-year-old athlete was planning on returning to the Ice Wolves roster after last year serving as team captain of the Meadow Lake Mustangs. Prior to last season, Hounsell played for La Ronge before being picked up by the Humboldt Broncos and then traded back to the Ice Wolves leading up to his eventual decision to play for Meadow Lake.

“I actually got cut (following the preseason road trip), so I will likely play with the Mustangs again this season,” Hounsell told Northern Pride. “There are a number of guys who want to come play this year, so the talent should be better than it was at the beginning of last season.”

The Mustangs compete in the Western States Hockey League and their training camp is scheduled for Sept. 20-22 at PineRidge Ford Place on Flying Dust First Nation. The team’s season-opener is scheduled for Friday, Oct. 11 in Meadow Lake against the Cold Lake Hornets.

Meanwhile, Kaminski said it’s not an impossibility to some day see the Ice Wolves compete in a neutral-site game in Meadow Lake or the surrounding area.

“That definitely could happen,” he said. “I hear there are some really nice rinks in Meadow Lake and other nearby communities, so that is certainly something we can look into for next season.”