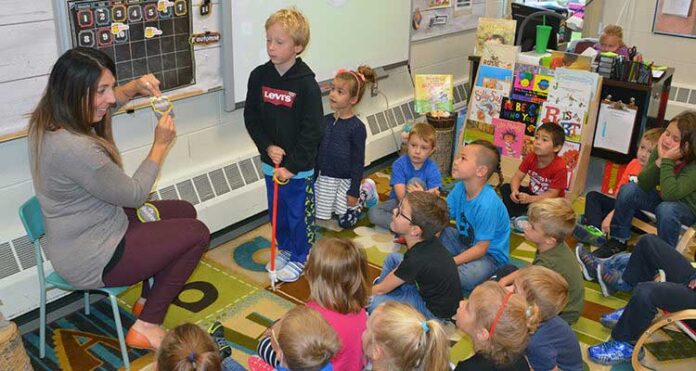 As the first group of French immersion students from Meadow Lake embark on their final year of high school, their hard work has paid off not only for themselves but also in helping to cement the program’s ongoing popularity and success.

According to Teri Brake, a French immersion teacher at Lakeview Elementary School, more students than ever before have enrolled in French immersion at the Kindergarten level this fall, something she said speaks highly to how much the program has been embraced locally.

“I wasn’t here last year, but understand we only had about nine Kindergarten students enrolled in French immersion whereas, this year, we have 15,” Brake said. “In fact, we did have 16 at first but one moved away. I’m not sure exactly why the numbers have increased as much as they have, but I do believe – with the first round of French immersion students set to graduate at the end of this school year – the program has gained some stability and has proven it can be a success.”

Brake said, over the years, French immersion in Meadow Lake has had its share of ups and downs with parents and students not knowing if the program would continue one year to the next and, just a couple years ago when French immersion students at Carpenter High School had to conduct their studies online because there was no teacher to lead the class. That has since changed, however, and the strong numbers this year, she believes, means nothing but good things going forward.

“It shows parents and children it is possible to go all the way with this program and graduate with a bilingual high school diploma,” she said. “A lot of people were worried about how things would go, but they were able to keep things going from elementary school, through the middle years and all the way through high school, and it doesn’t look like things are slowing down any time soon.”

Brake went on to say there are many benefits to being a part of the French immersion program.

“It gives students the opportunity to interact in a language-rich environment and it keeps school challenging, especially for the younger students,” she noted. “They also grow up together year-after-year opposed to other students who often have different classmates from one year to the next. After they graduate, having French immersion under their belts can provide them with more employment opportunities because they are able to communicate in Canada’s two official languages.”

Meanwhile, Brake said more families are becoming more open to the idea of putting their children in French immersion, noting fewer people are turned off by the idea their kids can’t do it because no one at home speaks French. She also said the influx in French immersion students this year is not an offshoot of greater Kindergarten numbers overall.

“Other Kindergarten teachers have told me this has been one of the lowest years for Kindergarten enrollment at Lakeview in recent memory,” she said.

This was echoed by Jubilee Elementary School principal Daryl Pearson who said Kindergarten enrollment at his school is about status quo when compared to this time last year.

“Our Kindergarten numbers are relatively consistent with what we saw last fall,” Pearson stated. “We have not seen an increase – right now our Kindergarten enrollment is around the mid 50s mark, which is what we had last year as well.”