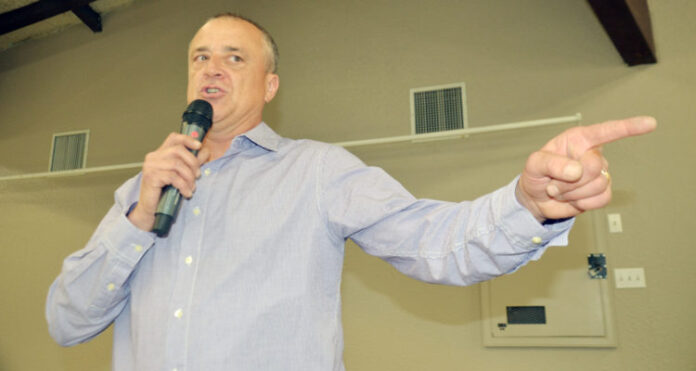 Merlin Seymour’s days of acting mayor of Meadow Lake are over.

In tonight’s (Sept. 18) municipal by-election, Seymour came out on top over fellow candidate Richard Levesque by less than 100 votes to officially fill the vacancy created by the resignation of former mayor Gary Vidal earlier this year.

Following his victory, Seymour said he is pleased with the result and is also relieved the by-election is over. Additionally, he said he is happy with how much interest was expressed by the voting public.

“The final numbers are still unofficial, but it was a very close race,” he said. “It was nice to see such a good voter turnout and I’m just happy to be on the winning end of things.”

In total 824 Meadow Lake residents and property owners cast a vote throughout the day and into the evening. Polls closed at 8 p.m.

“I’m actually quite impressed with the number of voters,” Dodds said. “Although there are more than 3,000 eligible voters in Meadow Lake, 824 is still very good for a municipal by-election. I believe the turnout was higher than usual because people were voting for both a city councillor and for the next mayor.”

Seymour, who was first elected to council six years ago, served as deputy mayor prior to getting a taste of the municipal leadership role when he took on the responsibilities of acting mayor. He said with the by-election now over, business as usual will continue at city hall.

“I will now be sitting down with the current council and we will start working on moving things forward,” he said. “We have our annual budget meeting coming up Oct. 5, so that will be the time to really get into the meat and potatoes of what’s to come and to move forward as best we can. Working to improve infrastructure will be a definite, and then we’ll see where things go from there.”

Seymour went on to share his appreciation for everyone who voted for him as well as Levesque in tonight’s by-election.

“It’s great,” he said. “It just goes to show the people of Meadow Lake care about what is happening in their community.”

Levesque – who formerly served as Meadow Lake town administrator and city manager – also praised the members of the public who took time to vote.

“A democracy cannot work if no one chooses to participate,” he said.

However, Levesque also said there could be tough times ahead for the city if council continues down the path he’s seen it on lately.

“With all the apathy, distractions and misinformation, this has been a learning experience,” he said. “Hopefully, those individuals behind the recent push to construct a multi-million dollar facility (multi-use recreational facility) understand what they’re getting into. Unlike when the new school division office was built, the province probably won’t be paying for this one.”

Levesque went on to further decry talk by the city to develop a multi-use facility, stating the money would be better served to help fund Meadow Lake’s share of a new long-term care facility.

“Still, I wish the very best of luck and offer my congratulations to Mr. Seymour,” he added.

In addition to the mayoral vote, ratepayers also had the opportunity to vote for a new city councillor to replace former councillor Kim Chiverton who resigned effective Aug. 31. Of the three candidates, Ron Dishko emerged victorious with an even 300 votes, defeating Anthony Vandenberg who secured 251 and Lyndi Marchuk who gained 238. With Seymour now officially the mayor of Meadow Lake, that means his former council seat now becomes vacant and another by-election will need to take place. The date for that vote, however, has yet to be determined.

“I haven’t decided if I will run for mayor when the next regular election rolls around, but I won’t be running in the immediate by-election,” Levesque confirmed.