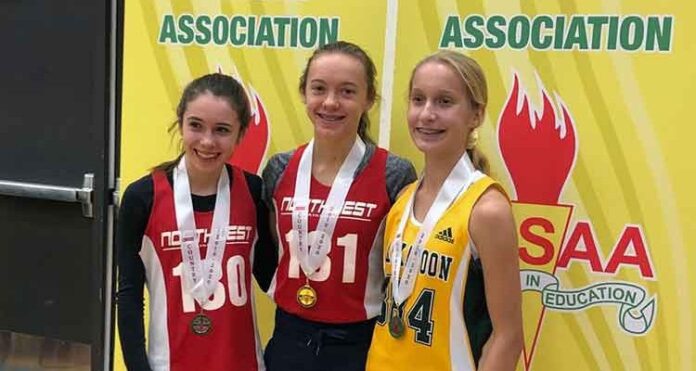 Another provincial banner will soon adorn the gymnasium wall at Carpenter High School in Meadow Lake.

“It was a great race,” Pearson said. “Jenna McFadyen (from Maidstone) and I have always raced against each other at these big events. We have a sort of friendly rivalry when it comes to both cross-country and track and field, so it was nice to be right alongside her once again.”

Pearson’s gold medal was secured when she completed the four-kilometre course with a time of 14:09. McFadyen, who finished first overall in the previous weekend’s regional competition (Pearson was second), won silver at provincials with a time of 14:22 while the bronze went to Allison Novecosky of Walter Murray Collegiate who clocked in at 15:22.

“This season I really worked on building my endurance for cross-country,” Pearson continued. “During the race, for the most part, I stayed as close as I could to Jenna and it ended up working out for me. There were a few hills we encountered near the end of the race that I was able to work to my advantage. I didn’t really go into provincials with a game plan other than to trust my kick at the end.”

“With about 500 metres left, Avery overtook her (McFadyen) on a series of rolling hills and never looked back,” Shakotko said. “Avery had beaten her in Midget and was second last year to Jenna in the Junior girls category. She was graciously excited and relieved to have made it back to the top of the podium this year.”

Meanwhile, Pearson said, even though she still has one more year of high school cross-country ahead of her, she is already looking at post-secondary opportunities.

“I’m going to participate in track and field and cross-country at the university level,” she said. “I’ve already contacted a few coaches and am working on building relationships, but I also want to keep my options open for now.”

Also representing CHS at the recent provincial meet was Aubrie Wilfing who finished 74th in the Midget girls category.

“Aubrie ran a very good race, defeating many runners from our district who beat her in the previous race,” Shakotko said. “She ran very well.”