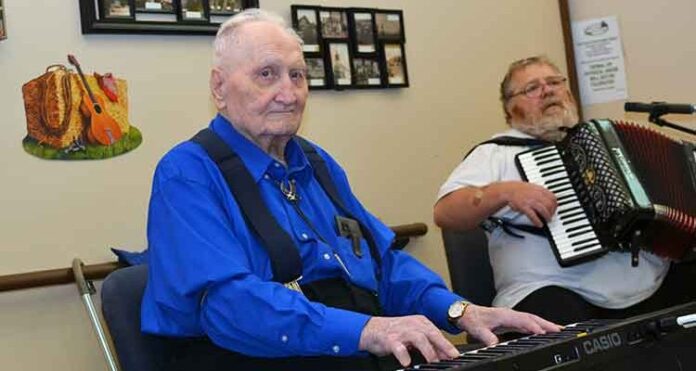 At 96 years of age, Meadow Lake’s Wilf Morgenstern has never lost his love for music.

In fact, Morgenstern still regularly performs not only in his home community, but at other venues throughout the Northwest.

“Without music it would be a pretty dull life,” Morgenstern said. “Music is a universal language. I’ve been performing most of my life. I started playing at dances when I was only eight years old, while these days I mostly perform at seniors’ lodges, as well as the Legion here in town, the Door of Hope, the villas, the hospital, all kinds of places. We also travel sometimes to places such as Loon Lake, Goodsoil, Lashburn, Maidstone, North Battleford, Big River, Dorintosh, Greig Lake… pretty much everywhere. We’ve also played at the local Telemiracle event the last four years.”

In recent years, Morgenstern has performed alongside fellow musician Dennis Lehoux among others as The Incredibles.

“Everybody seems to enjoy our music, so that’s why we still play,” he added. “The seniors really like the old time music we play. Some of these guys come in and play that modern stuff, but they don’t really go for that. Playing doesn’t bother me at all. My hands are OK. My back is a little bad, though, and I use a cane to walk with, but not because I really need to but I like to have it for insurance purposes.”

Morgenstern, who farmed for 65 years, has lived most of his life in Meadow Lake, having moved here with his parents when he was very young.

His interest in music began shortly thereafter when he taught himself how to play an old pedal organ.

“I started out with a pedal organ my dad brought with us from Maple Creek when we moved up here in 1924,” he said. “That was a long time ago and Meadow Lake wasn’t much then, but I enjoyed playing and later went from the organ to guitar, to violin, a steel guitar and then I switched to a Spanish guitar and later the accordion. I played the accordion for many years. I taught myself how to play all of these instruments. I never took a music lesson in my life aside from what they taught us in school, and that wasn’t much.”

Morgenstern’s daughter, Val Bishop, said her father bought his first guitar and amplifier when he was 16 years old.

“We still own that guitar and amplifier,” she said.
Bishop also said her mother, Rose, had a strong interest in music and music played a big part in her life growing up.

“My mom played the piano, while my sister played the piano and organ and my brother, well, he’s just like dad – throw any instrument at him and he can play it,” Bishop said. “I think it’s awesome my dad is still performing as much as he is. He loves to play and I’m happy for him.”