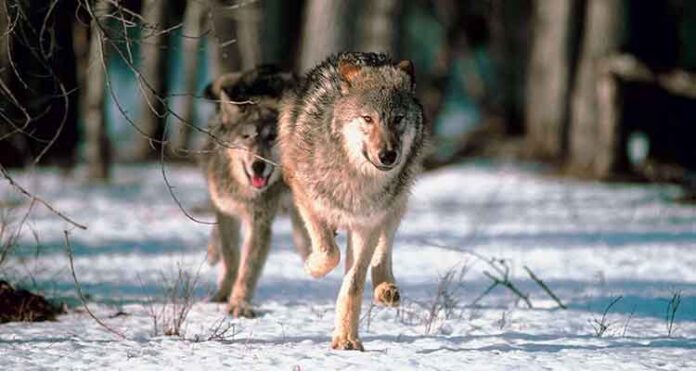 “I’ll break your bike in half!”

That’s the warning Cole Bay resident Annie Bouvier has given her brother, Kenneth, if he insists on continuing to cycle to the community from his cabin located about two kilometres west. Recently, Kenneth Bouvier experienced the fright of his life when he encountered a pack of wolves while biking home during the early evening of Oct. 9.

“It was about 5:45 p.m. and I was headed home to my cottage,” Kenneth Bouvier explained. “I’ve lived there for 19 years and have always walked or biked to and from the community, but this is the first time I ever encountered something like this.”

Bouvier, 55, had been in the village to pick up some gasoline from a friend as well as some moose meat from his brother.

“On my way home, about one kilometre from my cabin, I came over a hill and, holy smokes, they were all standing there – seven of them, two black and five grey wolves,” he said. “Before I could even realize what was happening, one started coming toward me, showing its fangs. Boy was I scared. I started yelling, and as it got to be about 10 feet or so away, I managed to get my jug of gas open, poured some on the road and lit it on fire with my lighter… the wolf jumped across to the other side of road where the others were all standing, so I made the flame bigger which kind of blocked them off so they wouldn’t cross the road. That’s when I jumped back on my bike and flew back into town as fast as I could.”

Bouvier suspects the wolves were following a game trail, but reiterated how frightening the experience was for him.

“They would have ripped me right up… there wouldn’t have been anything left except my bike and my gas jug,” he said.

When he got back to Cole Bay, Bouvier alerted his friend, Peter Coulineur. The two men returned together to the location where the wolves were sighted, but the pack had since moved on.

“I went back to my cabin that night, but my sister, Annie, later came and picked me up,” Bouvier noted. “She says I’m not going to be walking or biking anymore. I’ve been staying at her house for the last few days trying to calm down. It was very traumatic. I’ve often seen bears and wolves around here, but I have always seen them from a distance and never a whole pack of wolves all at once. I feel better now, but I was pretty shaken up. My life flashed before my eyes.”

Bouvier went on to say a lot of people, mostly nature lovers like himself, walk in that area.

“If I didn’t have the gasoline with me there would have been nothing I could have done,” he said. “That one just kept coming toward me showing its teeth. I was so nervous I couldn’t even open my little jug of gas at first, and when I finally did, the alpha started coming toward me as well.”

According to Daryl Minter, a conservation officer with the provincial Ministry of Environment, Bouvier’s actions were quite clever considering the situation he found himself in.

“It was quite resourceful on his part,” Minter said. “In this particular case, I assume it was a chance encounter because wolves are generally wary of humans. It’s not often someone will come across a wolf let alone a pack of wolves, but it does happen and it’s important to remember what steps to take if you ever do come across a wolf.”

Minter said the first thing to remembers is not to turn your back on the animal.

“It’s also best not to run,” he said. “If possible, face the wolf, stand tall and, if need be, raise your arms in the air to appear larger. When there’s more than one wolf, like this situation, try to determine which one is the dominant wolf and focus your attention on that one. The rest will usually take direction from that one. Also, try to position your back against a tree or some other obstacle in case the wolves decide to circle around. But, if you do encounter a wolf, it’s recommended you report it to your local Ministry of Environment office.”