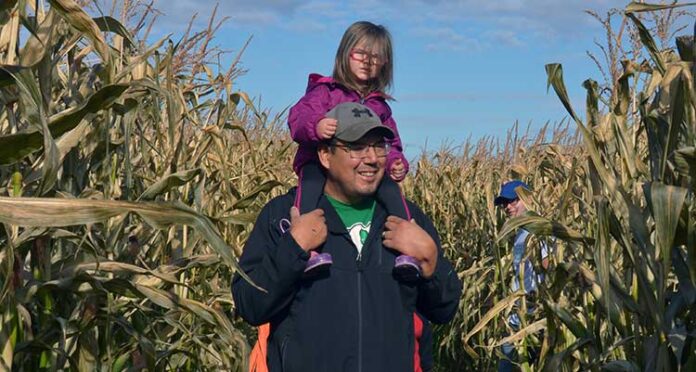 “It was an awful lot of people who came and we are just thrilled with the turnout. We didn’t know how many to expect, but in the end I can safely say we had more than 1,000 people show up.”

Those were the words from Steven Pylot, who helped organize the Oct. 6 corn maze event with his wife Susan, their children and members of the Meadow Lake 4-H Beef Club.

“Nobody could have expected what happened that afternoon – it was absolutely amazing,” he added.

Pylot said the week previous between 400-500 school kids from different regions went through the corn maze.

“The main punch behind it was to get school kids out and into an agriculture setting and get them to learn about where their food comes from,” he said. “And it just happened October is Ag Awareness Month, so to launch it we teamed up with the local 4-H club as a fundraiser for them. The club helped with the school tours and then also on the Sunday.”

The Pylot family developed a corn maze, more to celebrate agriculture and in a way give back to the community and to increase agriculture awareness overall.

“Earlier this year we had some interest from the schools who were inquiring about a corn maze, so we made one.We put together an ag awareness program teaching them what corn is, what it’s used for, its history, how it grows,” he continued. “So when they drive by a corn field they understand why corn is grown here.”

Following last week’s event Pylot said they are getting more requests for tours.

He noted his long-term plan is to put together an ag awareness site where there can be some learning and teaching of agriculture for the younger people, teachers included.

“We can’t thank the community enough for their interest, their curiosity and simply their plain respect and gratitude toward the farming community,” Pylot added. “It was such a great time and wonderful to see a great group of people and families attend.”