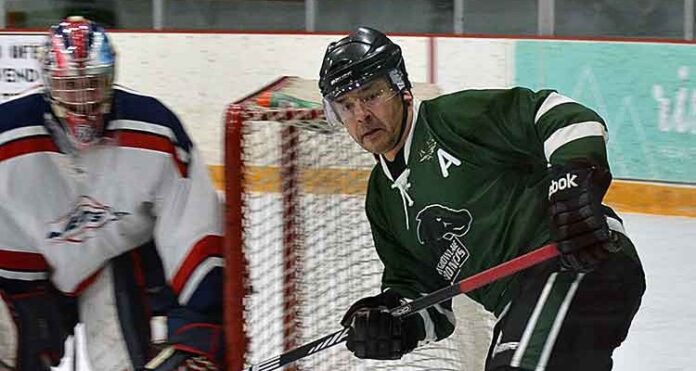 At age 50, Opekokew – who is originally from Canoe Lake Cree First Nation – is the oldest member of the Meadow Lake Senior Broncos roster, and he doesn’t see himself slowing down any time soon.

“As long as they want me, I’ll stay,” Opekokew said.

Opekokew, who previously played for the local Stampeders and the Big River Braves, joined the Meadow Lake Broncos squad at the start of this season. He said it was only going to be for a few games here and there, but once he stepped foot back on the ice, there was no looking back.

“Darren (Caron) talked me into coming out and skating with the boys,” Opekokew said. “It felt really good, so I offered to play with the team for a game or two. Well, so far that’s turned into six games.”

Opekokew went on to say his time with the team thus far has proven to be everything he expected and more.

“A lot of these guys I played against in the past, but now I have a chance to play with them,” he said. “It’s been a lot of fun, and that’s what hockey is all about for me now – having fun. When I was younger, I was a lot more competitive.”

As for what keeps him as actively involved as he is considering his age, Opekokew said he does not have a definitive answer.

“I couldn’t say for sure,” he noted. “I just love the overall atmosphere, and I love talking with the boys. When I was growing up, everyone in hockey was always screaming at you to do this or to don’t do that, but with my experience and everything I can bring to the ice and to the locker room, I just want to be able to talk to the guys and I want them to talk to me. If there is anything about hockey that’s bothering them or any way I can help cheer them up, I will. Hockey shouldn’t be about focusing on your mistakes, but rather about looking at how you can become better overall.”

According to Broncos head coach Winston Morin, Opekokew has been a great addition to the team this season.

“He brings lots of experience and is a real good teammate,” Morin said. “He’s almost like having a coach on the ice. He’s been a big help to the team so far.”

Opekokew was in action with the Broncos this past Saturday when the squad hosted the undefeated Paradise Valley Jets at the Meadow Lake and District Arena. After a slow start where both teams appeared equally matched, the Broncos eventually took control, downing their opponents 8-2. Scoring for Meadow Lake were Jared Iron, Todd Fiddler, Colby Stanley each with two, as well as single markers from Les Ludwig and Ashton McIntyre.

“It was a pretty good game” Opekokew said. “We knew going in Paradise Valley was one of the toughest teams in the league, so we needed to have our four lines out there and, eventually, we were able to out-skate them. They became gassed and we were able to take control and give them their first loss of the season.”

Currently, the Broncos are tied for first overall in the SaskAlta Hockey League standings with a record of 5-1. Also first with a 5-1 record is the Wainwright Rustlers. Lashburn is third (5-2), the Two Hills Longhorns are fourth (4-2) while the Hillmond Hitmen are fifth and the lone undefeated team thus far at 4-0.

“The calibre of hockey in this league is so good, any team can beat any other team on any given night,” Opekokew said.

Next up, the Broncos will be in St. Walburg to face the Eagles this Friday (Dec. 6) and in Maidstone Dec. 7.