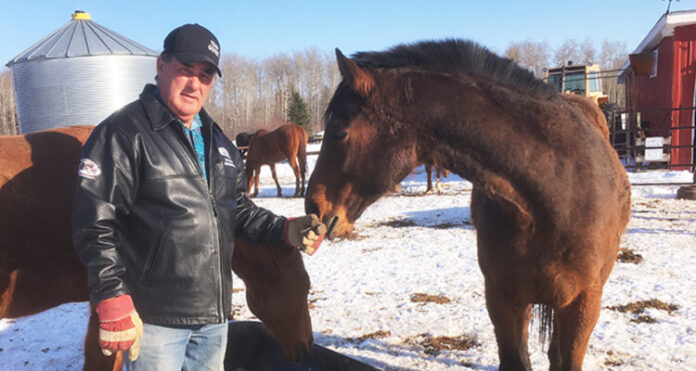 Gary Gorst’s career as a chuckwagon driver could already be over.

The Meadow Lake area resident is scheduled to retire from the sport at the end of the 2020 season. The ongoing COVID-19 pandemic, however, makes it questionable as to whether or not there will now even be a season.

“I was very disappointed when I heard the news,” Gorst said with regard to last week’s announcement by the World Professional Chuckwagon Association stating the first four shows of the WPCA Pro Tour will not run as scheduled. “I was looking forward to being back on the track, but now we don’t know where things are going. Hopefully we don’t lose the whole season. That’s a scary thought.”

According to a recent post made to the WPCA’s official website, the Grande Prairie Stompede and High River Guy Weadick Days have made the “difficult decision to cancel their events.” Meanwhile, the WPCA, in consultation with Prairieland Park in Saskatoon and the Medicine Hat Exhibition and Stampede, have agreed to postpone their respective tour stops and explore what options may exist to reschedule these events in the future.

“The health and safety of horses and humans is the number one priority in the WPCA,” the post reads. “Sometimes tough decisions need to be made to maintain our high standards. With the full impact of COVID-19 still unknown and to maintain our commitment to the WPCA Code of Care and Animal Safety, decisions related to racing or cancelling and postponing events are not made lightly.”

Gorst’s son and fellow WPCA driver, Logan Gorst, also expressed his disappointment in the change of schedule for the upcoming tour, but also stressed how important it is to adhere to government regulations when it comes to battling the coronavirus.

“I’m hoping things turn around and we can get a partial season,” Logan Gorst said. “COVID-19 is affecting so many businesses financially, and we’re in the same boat. It costs a lot of money to feed all these horses, but I’m not complaining because there are people out there who have it a lot tougher than we do.”

He also said he feels for his dad when it comes to the possibility of missing out on what would have been his farewell season.

“It’s hard on him because he was set to retire at the end of this year,” Logan Gorst added. “If the entire season does get cancelled, it will be interesting to see what the Calgary Stampede does. I’m wondering if they will overlook their mandatory retirement age (65 years) rule for this year and allow him one last run next year.”

Meanwhile, as wintry weather lingers, the Gorsts, including Gary’s other son and fellow driver, Dustin, have not been able to start the spring training they normally would at this time of year.

“I started a little bit of training, but now I’m going to hold off until the snow is gone and we know more about what is actually going on,” Dustin Gorst said.

“The weather isn’t allowing us to do much right now, and with everything up in the air right now, I would hate to get started and then have nothing happen,” he said. “Hopefully we can go – that’s what I’m praying for. But, at the same time, the WPCA doesn’t want to put anyone in jeopardy.”