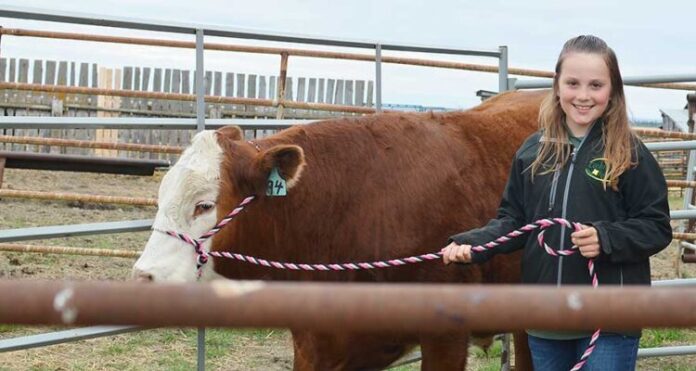 There’s no bull about the impact COVID-19 has had on District 36 4H.

“The annual 4H Show and Sale – which normally takes place as part of Stampede Week at the Meadow Lake Arena – is cancelled this year because we cannot gather all our members together as that would exceed the maximum number of people allowed for public gatherings,” explained Bev Tallmadge, general leader of the Meadow Lake 4H Beef Club. “However, we are still having a steer sale. The live auction will take place on June 2 at the stockyards.”

Stampede Week itself has been cancelled because of the pandemic, but Tallmadge went on to say the June 2 date still falls within the timeframe of when District 36 would have regularly held its show and sale. However, she also expressed how different this year will be.

“The steers will be sold, but the members will not be present,” she said. “It will be set up much the same as the normal sales that take place at the stockyards, but it’s the best we could have done considering the current circumstances.”

According to District 36 4H president James Jensen, the biggest impact to the organization this year – what would have marked the 69th year for the show and sale – will be on the kids themselves.

“They put so much work into their projects for the whole year and deserve to be recognized,” Jensen said. “Unfortunately, this year, the kids also can’t be face-to-face with anyone when it comes to the business side of things. Fortunately, however, the management at the stockyards has stepped up and offered to sell the animals. If they hadn’t, we would be really hooped because of all the money and work that has gone into these animals means it’s highly important they can be sold for a reasonable price.”

Among the many 4H members involved with the club this year is Tallmadge’s son, Cody.

“With this all going on, it’s hard to not be able to have our achievement day to show our animals and be involved in all the activities leading up to it,” Cody Tallmadge, a senior 4H member, noted. “Like the wash and clip days where all the members helped each other to wash their cattle. But, (with COVID-19), it is good everyone is social distancing to protect everyone.”

Bev Tallmadge, meanwhile, also expressed her gratitude to Meadow Lake Livestock Sales, but still said it won’t be an easy experience this year.
“It’s hard,” she said. “We have so many members including quite a few who are in their first year and others who are in their last year of 4H, as well as everyone in between. In total, our Meadow Lake club has more than 20 members. There’s also the Makwa Beef Club, the Meadow Lake Light Horse Club and the Goodsoil Multiple Club that make up District 36 4H – there are lots of people involved.”

“Right now we’re just talking about the steers, but there are also the heifers, the calves and the multiples – a lot of kids take part, so I’m hoping things will clear up (with COVID-19) enough so we can continue with District 36 4H this fall,” he said.