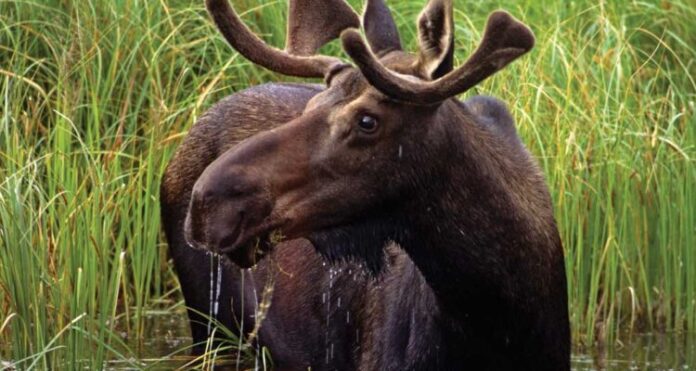 An unexpected visitor arrived in the Meadow Lake community early Tuesday morning (May 5).

“My husband, Ron, and I were driving our three kids to day care around 7:30 a.m. when we saw it,” explained Meadow Lake resident Jen Bannister. “We were travelling down 2nd Avenue West when we saw something in the road ahead which we at first thought was a horse. As we got closer, it crossed the road and went behind some bushes before darting back. That’s when we realized it was a moose.”

Bannister said the animal appeared to be a young moose, and was likely scared by its surroundings considering how it was running back and forth.

“After we dropped our kids off, we drove around to see if we could find it,” Bannister continued. “I posted about the experience on Facebook and, before no time, other people started posting about how they had seen it as well. Apparently it was seen at Lions Park a short time later, which shows just how much distance these animals can cover in a short amount of time.”

While the Bannisters never did locate the moose a second time, news of its presence in the community was confirmed by a conservation officer.

“The Ministry of Environment did receive a call on our tip line about a moose on the loose in Meadow Lake,” Randy Ross said. “The call came in around 8 a.m. with the caller stating the animal had been seen on the southwest side of town near Jubilee Elementary School.”

Ministry officials, however, were unable to locate the moose and said likely found its way out of town.

Ross said it is not completely uncommon for moose to make their way into urban locations, adding it’s imperative – when this happens – for the public to keep its distance.

“It’s important to stay away from the moose and to contact the authorities,” he said. “It can be especially dangerous if the moose has a calf nearby. Either way, a moose is a very large animal and can be very unpredictable. And, when it finds itself in surroundings it is unfamiliar with, it can become stressed. The best things is to just keep your distance.”

Bannister, meanwhile, said she was not the one who reported the moose to the authorities.

“This was a first-time experience for the both of us,” she said. “I’ve seen skunks in town before, which is probably the biggest form of wildlife I’ve seen in here until now. I never expected to see a moose in Meadow Lake.”