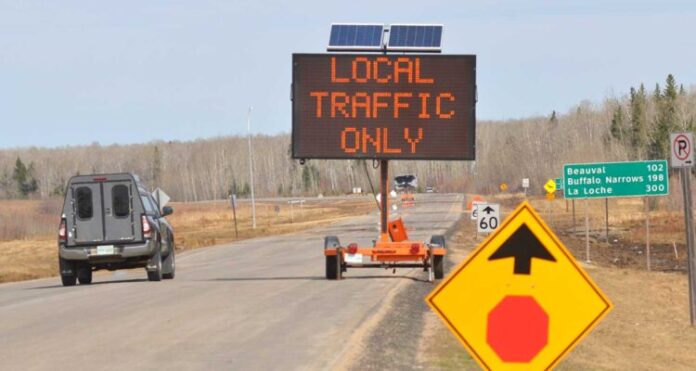 The provincial government is pulling out all the stops to help contain the coronavirus outbreak in Saskatchewan’s north.

“Things are starting to come into place now, but it’s far from problem solved,” remarked Clearwater River Dene Nation chief Teddy Clark when contacted by Northern Pride earlier this week. “We have a number of measures now in place to minimize the risk of spreading COVID-19, measures that primarily involve slowing traffic down and keeping people in one place. The virus doesn’t move on its own, it’s people who move it.”

As of yesterday (May 6), there were seven confirmed cases of COVID-19 at the CRDN reserve including four recoveries. In the neighbouring community of La Loche, however, there are now a total of 89 cases. Of these, 68 are still considered active.

“Unfortunately, we have also had two deaths related to COVID-19, but hopefully it remains at only two,” Clark said.

According to The 155, a website operated by the Joint Leadership Group of Métis communities, municipal governments and First Nations to deal with COVID-19, as of May 5, Beauval had five confirmed cases of the virus, Buffalo Narrows one, CRDN seven, English River First Nation six and Ile-a-la Crosse one.

Meanwhile, the Saskatchewan Health Authority (SHA) is expanding its testing and contact tracing in La Loche and Clearwater River Dene Nation as it continues its vigourous approach to deal with the outbreak. The enhanced efforts will work in alignment with the testing and assessment being done by the Northern-Inter Tribal Health Authority.

In addition to testing and contact tracing, the re-allocated support will also assist with home monitoring efforts, as well as environmental and security services.

“It is important we work closely with the community to support individuals in understanding the importance of this work and ensuring they are able to self-isolate,” stated Dr. Rim Zayed, a medical health officer with the Northern Population Health Unit. “This will further assist us in containing this virus.”

“We understand, in order to get this outbreak under control, it is going to take a team effort, including community leadership, our local organizations, the SHA and other government agencies,” said La Loche mayor Robert St. Pierre. “And, most importantly, it will take the collective efforts of our community as we all share in the goal of eliminating COVID-19”.

“The province has really stepped up in terms of providing us with more resources,” he said. “I commend these people, as well as the frontline workers and the many volunteers who are helping us to fight the spread. There is a lot of testing going on in CRDN and La Loche, while checkpoints are in place throughout the North to help control traffic.”

There is a checkpoint at the reserve also, minimizing the number of people travelling into La Loche.

“Local stores have shut their doors as well because we have been having a real problem up here with people not following the rules and not practising social distancing,” he added. “We continue to preach the rules of social distancing, and a lot of effort is being made locally, and by the SHA, our First Nations health branch, the Métis Local, the La Loche community and more.”

In the meantime, people from across the province have been showing support to the North as the crisis continues to unfold.

“A number of communities have been putting items together and donating them to us,” Clark said. “People from all over Saskatchewan have been calling to ask how they can help. This is very welcome, and if we all do our part and follow the rules, we’ll get through this.”