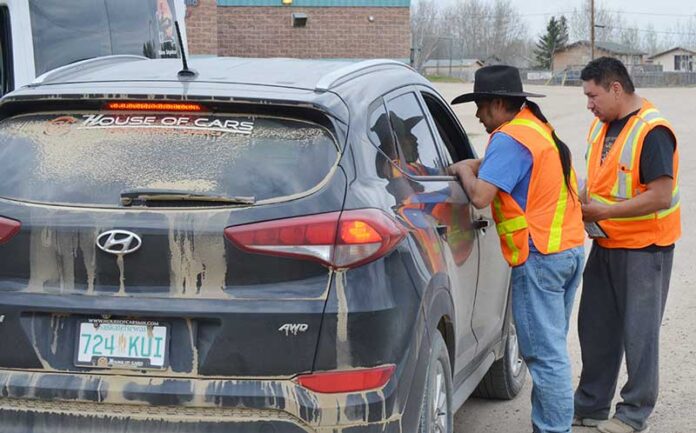 The people of Loon Lake and nearby Makwa Sahgaiehcan First Nation are of the shared opinion enough is enough when it comes to the presence of gangs in their communities.

Earlier this month, Loon Lake RCMP met with MSFN chief and council, local elders, as well as a security team from the First Nation to discuss efforts to stifle such activity following a recent influx in gang members coming into the reserve.

“Over the last several years, Loon Lake RCMP has had tremendous support and help from Makwa Sahgaiehcan First Nation and have had great success making the area a safer place,” explained Sgt. Ryan How, RCMP detachment commander in Loon Lake. “Community members have been very clear they won’t tolerate drug dealers and gang members.”

As a result, RCMP executed a series of drug warrants throughout the week of May 11 on known drug dealers. Further to these warrants, multiple houses were searched looking for prolific offenders on warrant. In one search, more than 10 grams of crystal meth was seized along with marijuana. In other locations, weapons and ammunition were seized and multiple arrests made.

“It’s a very serious problem,” chief Ronald Mitsuing said with regard to gang members infiltrating the First Nation. “They bring in drugs to our community, but we have a security team now, which has been a big help in preventing outsiders, including gang members, from coming here.”

How, meanwhile, said more and more people have been speaking up and cooperating with police than ever before in terms of sharing information about local gang activity. This, he said, has been of great value to the RCMP and their efforts to curb crime.
The gang members themselves, How added, come from all over.

“Most of these people are pretty mobile,” he said. “They turn up in the area either because they have family ties here or because they’re simply looking for a place to hide.”

How also said gangs bring with them an aura of fear and the threat of violence, stating it’s not uncommon for gang members to steal firearms, cut them down to pistol size which they then wrap in their red gang colour and use as instruments of intimidation.

“I give a lot of credit to chief Mitsuing and his council for encouraging people to stand up to this sort of thing,” How stated.

Mitsuing said gang activity a problem that’s been ongoing for a number of years, but is finally being exposed more and more.

“(The influence of gangs and gang members) can really bring people down, especially the younger ones,” the chief noted. “They don’t care who they prey on, but the ongoing cooperation with the RCMP has been effective. There have been quite a few arrests already, and our security team is monitoring the community and anything suspicious they observe is reported right away.”

How reiterated this proactive approach from the First Nation has proven important to the police and their investigations.

“Even though we have pushed hard, we are seeing an increase in gang activity in the community, but I also believe we’re in a better place than we were 18 months to two years ago.”

Among those concerned with gang activity in the area is Clint Thibault, owner of Loon Lake Service, the local Esso fuel station.

“I personally haven’t had too much trouble with gang members, but I do know they’re here and this sort of thing happens,” Thibault said. “But, the police are doing a good job.”