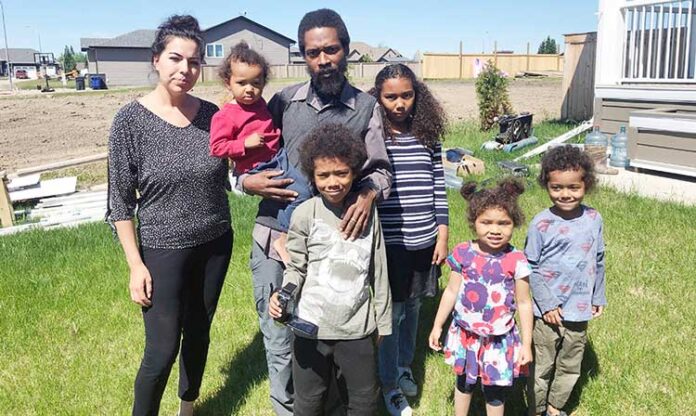 Don Brown, who resides next door, had been constructing the dwelling on 6 Carl Drive, but – according to city manager Diana Burton – the house was demolished because its unfinished state made it not only an eyesore to the neighbourhood and a nesting site for pigeons, but also because it had become a potential safety hazard.

“A building permit was originally issued for 6 Carl Dr. in August 2015,” Burton explained. “All building permits have a normal expiration of two years from date of issuance, but can expire sooner if work is stopped for a period of six months or more due to the increased chances of damage to the building. Work on this building stopped in September 2016. In April 2017, an order was issued to stop additional work and remedy the existing building deficiencies.”

Brown, however, said he doesn’t understand why a stop work order was issued because he claims construction was indeed ongoing at both the 6 Carl Dr. location and his own home at 4 Carl Dr. Later, when he attempted to purchase a new building permit to complete the work, he was instead served with an order to remedy. This was in September of 2018.

“The city had the property assessed by a structural engineer and issued an order to remedy that outlined the fixes that would be required before the city would consider renewing the building permit on the property,” Burton said. “This order stated, if these fixes were not completed in 30 days, the structure would be demolished. These remedies were not completed and the owner did not appeal.”

Brown said he did not appeal because he fully intended to complete the necessary fixes. But, he added, 30 days was not enough time and he would have much preferred to have been allowed to purchase a new building permit so he could have more time to finish the entire project.

“Thirty days was like giving me a sponge and asking me to soak up the entire lake,” he said.

In the meantime, Brown secured the site with fencing, while negotiations ensued between the legal counsels for both the city and Brown for two additional months.

Brown does not agree with this, stating the court did not render a decision in the city’s favour, but rather “chose not to intervene” and simply ordered Brown to pay a $500 court application fee. That’s why he was determined not to allow anyone on the property last week. He also said he believes his race may have played a factor in terms of the alleged complaints made to the city by nearby residents, as well as what he feels were roadblocks put in place to make it difficult for him to complete the project.

On the day of the demolition, Brown attempted to prevent the crew from moving in by presenting them trespassing notices.

“I was arrested in front of my family by the bylaw officer (Joe Hallahan) and taken by the RCMP to the local police station,” Brown continued. “After 10 hours they released me on the promise to appear in court for the alleged offence of obstructing a peace officer.”

Burton firmly noted, from the city’s perspective, race did not play a factor in how this particular file was handled.

“We have been trying to deal with this issue for a number of years,” she said. “Ordering a demolition is not something we take lightly as an organization. However, we also have a responsibility to all our residents to protect public safety, and that was what guided how this property was addressed.”

Brown is scheduled to appear in court on the obstruction charge July 13.