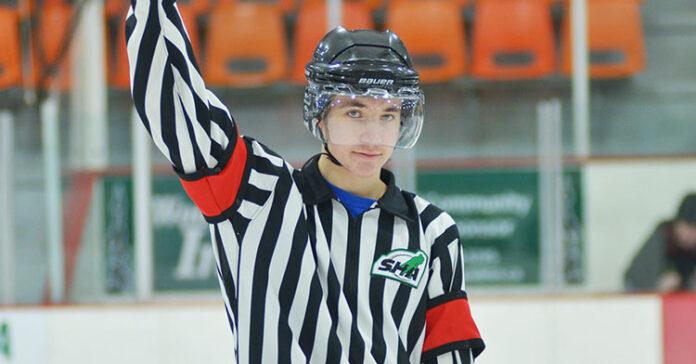 He earned the honour in the SHA’s Zone 7 and the accomplishment automatically nominates Berry for Hockey Canada’s award in the same category. One winner will be selected by Hockey Canada from throughout Saskatchewan.

“Brayden was able to earn a spot in the U15 SaskFirst Top 80 Tournament and was impressive, earning a referee spot in the final game of the tournament,” noted a recent SHA news release.

Berry has been officiating for five seasons and played hockey up until 2016.

Among those pleased with Berry’s achievements as well as his dedication to the sport is veteran referee Dale Neudorf.

“Right up front, Brayden is a good kid,” Neudorf said. “What I like about Brayden is he is teachable, he’s not a know-it-all, he’s always willing to dialogue with anybody and he’s not an in-your-face type of guy. If he sticks with it, it won’t be long before he’s officiating some high level hockey games.”

“Brayden is a confident official on the ice and his knowledge of the game exceeds his age,” Assman said. “I’m glad to see him recognized. Brayden has always been a pleasure to work with, he communicates well with the players, coaches and his fellow officials. The only problem is he’s moving on, which means Meadow Lake is losing another great official.”