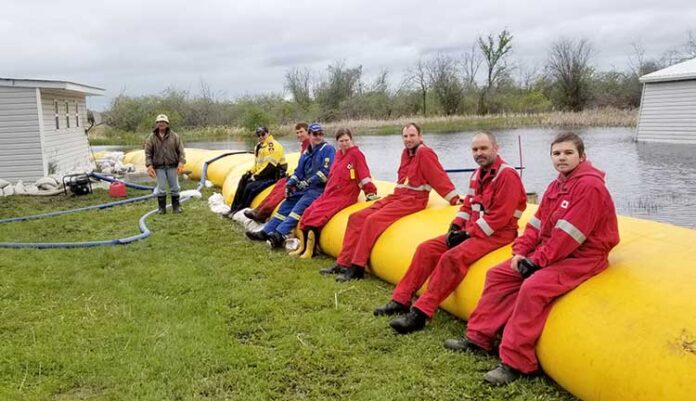 When it comes to his cabin at Flotten Lake, John Michael is not opposed to the idea of owning lakefront property. As a homeowner in the City of Meadow Lake, however, it’s a different story.

According to Michael, the city needs to find a permanent solution to address the flooding that often occurs at his property on the far end of 4th Avenue East and which he most recently experienced last week. An improper drainage system, Michael said, combined with several days of prolonged rainfall earlier this month created chaos in terms of the amount of water that backed up into his backyard, as well as others in the neighbourhood, and which also threatened to encroach on his home.

“We’ve had issues with flooding here before, so we knew it was coming,” Michael said. “Before we left for our cottage at Flotten Lake last week, we hauled all our equipment and supplies out of our back shed and into our garage. I’m glad we did because, when we came back yesterday (June 14), there was about two-and-a-half feet of water in and around the shed. I had to wear hip waders to open the door so I could get to the sandbags I had stored inside.”

Michael said he has never seen the situation get this bad.

“For years I have been telling city officials my opinion, and that is the long-term solution to solve this problem would be to build a proper berm between the affected properties and the lake,” he added.

Meadow Lake itself is about three quarters of a mile from his property, and Michael said the recent rainwater has been unable to properly drain into the nearby Meadow River or into the lake because there’s simply so much of it. He also said a dirt pile between the nearby properties and the lake as the result of the development of four nearby ponds also contributes to the excess water’s inability to properly drain.

A temporary solution was found Tuesday evening (June 16), however, when local firefighters installed four rubber berms filled with water. According to fire chief Neil Marsh, the berms – which now encircle Michael’s home – were provided to the city by the province’s emergency management branch.

“They conform to the ground and make a huge barrier that will keep most of the water out,” Marsh said. “We’ve only used them at Johnny’s place so far, as his was the worst hit. They will be used as needed.”