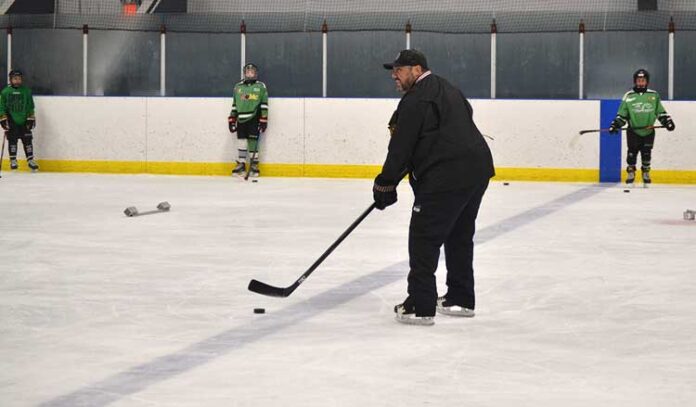 Young hockey players are once again on the ice at PineRidge Ford Place on Flying Dust First Nation.
After closing prematurely this spring because of the COVID-19 pandemic, the rink is once again in use thanks to the Snipe and Celly Skills Camp which began Monday (June 15).

“Originally we planned for our camp to begin May 11,” explained arena manager and camp instructor Clay Debray. “We had 85 kids signed up, but ended up getting shut down by the government that same day.”

Because PineRidge Ford Place is technically an indoor arena, Debray was told the facility could not reopen until phase 4 of the Reopen Saskatchewan Plan. After contacting the necessary government officials, however, and providing photos, videos and enough background information and other requirements pertaining to the camp – including signed liability forms from parents of would-be participants – PineRidge Ford Place was given the OK to reopen as part of phase 3.

“It’s more of a strength and conditioning camp for youth hockey players,” Debray said. “We’re looking after the physical and mental well-being of the youths who take part, and that’s also what we told the ministry.”
While initially disappointed with abruptly having to put things on hold, Debray said – when the camp finally opened this week – the number of registrants, which includes all levels of youth hockey, had increased to 147.

“The camp runs Monday to Friday for the next month,” he added. “Current restrictions dictate we can have no more than 15 people in the building at one time and those who are here have to practice social distancing, so the participants arrive in their gear (to avoid using the dressing rooms), have numbered chairs they sit in to tie their skates, and then they put on their helmets and head onto the ice for an hour-long session.”
Extra time is given between sessions to allow for a proper and thorough cleanup before the next group arrives at the rink.

“It’s working out very well so far and the kids just love it,” Debray said. “It’s been running quite smoothly.”
Among those enjoying himself at the camp is 11-year-old Peewee player Miller Gerwing of Meadow Lake.

“The camp is really fun and it’s helping me improve how I play hockey,” Gerwing said. “It feels really good to be on the ice again. I look forward to becoming a better skater and being more smooth out there.”

Meanwhile, the first part of the Reopen Saskatchewan Plan’s phase 4 takes effect this Monday (June 22). On this day, children and youth camps, outdoor pools and splash pads, and outdoor sports activities will be allowed to resume. This news means Meadow Lake Minor Baseball will also be able to put together a modified season for later this summer.