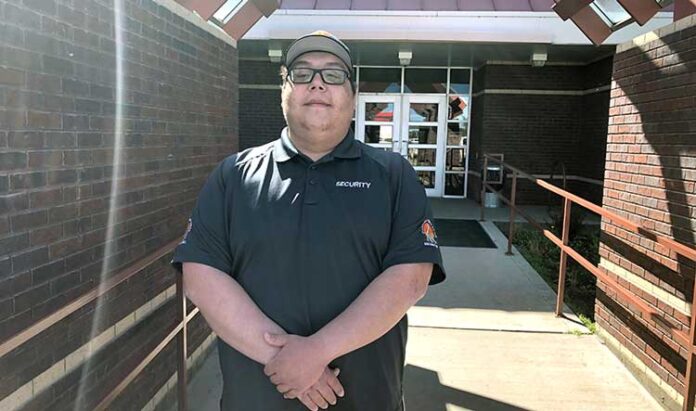 Flying Dust Security Inc. has increased its presence both on and off the reserve.

According to security manager Darren Lachance, the company has been in much demand recently especially when it comes to efforts to enforce stricter guidelines now in place because of the COVID-19 pandemic.

“Most recently we’ve been at the local gas station (FDB Fuels) where we maintain both security and crowd control,” Lachance explained. “No more than five people are allowed in the store at one time, so we make sure that rule is followed and we also make sure anyone entreating the store uses hand sanitizer.”

In addition to their efforts at the gas station, Flying Dust Security Inc. also has a guard stationed outside the Flying Dust band office each day to make sure similar rules are being followed and, until recently, guards were also stationed at the Golden West Manor seniors’ apartment building in Meadow Lake.

“We finished up there recently, but were at the high rise for about two months,” Lachance said. “It was our job to make sure no one was going into the building who wasn’t supposed to, and to just help keep an eye on the tenants.”

Golden West Manor is owned and operated by the Meadow Lake Housing Authority. In a recent statement, the Saskatchewan Housing Corporation said the hiring of Flying Dust Security Inc. was one of numerous measures taken by Meadow Lake Housing to ensure tenants were kept safe during the pandemic.

“The Flying Dust First Nation Security assisted the Meadow Lake Housing Authority by providing additional resources to help monitor and implement the pandemic protocols in place at Golden West Manor,” the statement reads. “Some of the pandemic protocols include increased sanitation of common areas such as entrances and elevators, and limiting the number of people coming into the seniors’ building. The Meadow Lake Housing Authority has a very positive relationship with the Flying Dust First Nation and its members are familiar with tenants at Golden West Manor. Rather than looking at security resources outside of the community, it just made sense to contract with Flying Dust First Nation Security to help ensure tenants felt safe and remained healthy.”

According to Lachance, the move off-reserve necessitated reclassifying the security company as a business.
“It’s still owned by the band, but we’re now considered an actual business,” he said.

Lachance helped initiate the security force last year after working a night security job for 14 years. One of the group’s first assignments was to provide security for Prime Minister Justin Trudeau when he visited the First Nation last summer.

“From there we just kept the guys on and eventually got a call from North West College to provide security at the local campus,” Lachance noted. “We currently have 12 security guards on staff, but we will be expanding. We still do nightly patrol (at Flying Dust), but have been extra busy with all this COVID-19 stuff.”

Lachance went on to say he doesn’t mind being busy, however, adding his team is able to take away some of the extra concerns businesses and other organizations find themselves facing because of the pandemic.

“With us on board, they can focus on their regular routines and not have t worry about who is coming and going,” he said. “Everyone is pretty good about following the rules and, as a local business, we want to do our part to help other local businesses.”