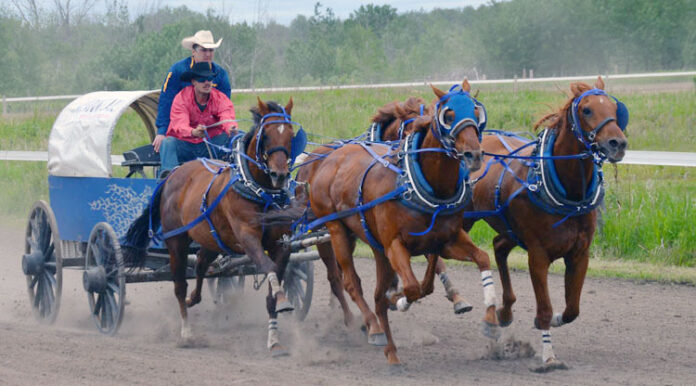 When Meadow Lake’s Kale Lajeunesse officially climbs into the wagon box for the first time at the start of the 2021 Canadian Professional Chuckwagon Association (CPCA) season, he plans to be a force to be reckoned with.

Lajeunesse, who has served as an outrider in the CPCA for the past seven years, has already been gaining his fair share of experience as a driver, most recently at a non-sanctioned race held Saturday (June 20) at Bear Creek. The event, designed to respect social distancing rules, saw Lajeunesse earn the fastest time of the day, an achievement he believes will benefit him greatly as he pursues the next stage in his chuckwagon racing career.

“As an outrider, you find yourself immersed in the lives of the various chuckwagon drivers,” Lajeunesse told Northern Pride. “My wife, Kristinn, and I, however, have decided to pave our own way and to create our own kind of wagon life. We want to create something other people will want to be around and, hopefully, we’ll have success for many years to come.”

While it was always his dream to one day become a driver when he first became involved in the sport, Lajeunesse said he still plans to outride here and there as a way of supplementing his earnings. His focus as of late, however, has been on developing his skills as a driver. He recently acquired a herd of horses and, even though the 2020 CPCA season was cancelled because of COVID-19, Lajeunesse said non-sanctioned events such as the one at Bear Creek are a great way for drivers to develop their skills, an opportunity to train the horses and keep them active, and a way of entertaining racing fans disappointed in the absence of the CPCA as well as the World Professional Chuckwagon Association (WPCA) this year.

“It was a great way for people to get out and to simply enjoy themselves,” Lajeunesse said. “As for the racing, it’s all new to me. The goal is for Kristinn and I, along with our children, to do this as a family. It will be a lot more work now because, in addition to racing, we have to care for all these animals, feed them and so on.”

According to fellow driver and CPCA director DJ King, Lajeunesse is a welcome addition to the ranks.

“Kale is one of three new drivers who will be joining us next season depending on how things go,” King said. “We need new drivers if the sport is going to survive and what makes Kale special is, unlike many other drivers who come from chuckwagon racing families, Kale was not born into the sport. He grew to love it, and that love is what will make him successful.”

King, who organized Saturday’s races at Bear Creek, said future non-sanctioned events will be coming up later this summer at different locations as a way of continuing with training efforts and as a treat for racing fans in general.

“Like any sport, you need to stay sharp,” he said. “It’s not good to stay on the sidelines too long or you’ll get rusty and, in this case, that goes for the drivers and the horses. Saturday’s event was what everyone needed. It was great therapy for everyone involved.”