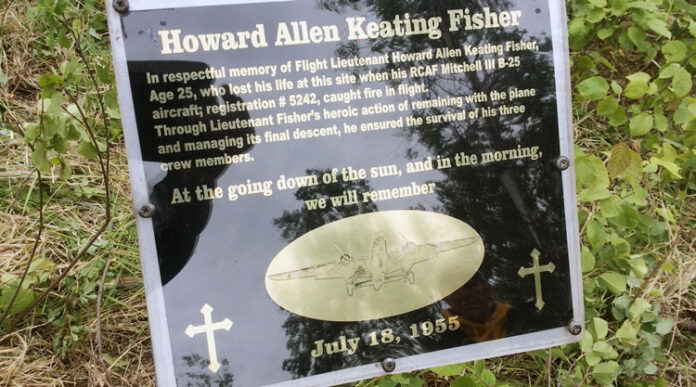 A tragic piece of Goodsoil history has not been forgotten.

Sunday (June 28) members of Goodsoil’s 50:1 Vintage Snowmobile Club gathered at the ranch of club president Barry Getzinger on the south side of the Beaver River to pay tribute to a member of the Canadian Armed Forces who lost his life at that site nearly 65 years ago.

“It was on Barry’s land where many years ago there was a tragic accident,” explained club member Murray Rausch. “A Royal Canadian Air Force B-25 Mitchell 3 bomber out of the nearby Cold Lake air base sadly caught fire in the air and was observed as it struggled for a while and eventually crash landed. This was July 18, 1955.”

According to Getzinger, his father and grandfather were haying in the area at the time and witnessed the crash.

“This is a very remote yet very large area – just about 11,000 acres – which has been in my family since the late 1940s or early 1950s,” he said. “When I was growing up here, I would go horseback riding and, for years, would go by this downed plane. Shortly after the crash, it was my dad and my grandpa who took RCAF officials to the crash site on horseback so they could conduct their investigation. When they were done, they left it there. The plane is made of aluminum, so it did not rust. It’s still there – it’s part of the ranch’s history.”

Getzinger said he would like to preserve the crash site so future generations will know the story and will continue to honour the memory of the pilot, Flight Lieutenant Howard Fisher of Indian Head, SK. After sharing the story with his peers in the local snowmobile club, the decision was made to have a plaque created and installed at the crash site. This plaque was unveiled during Sunday’s gathering.

“Howard Fisher’s actions were heroic that day,” Rausch added. “When the plane caught fire, it was observed circling in the air while Fisher gallantly tried to buy some time to allow his crew to be able to parachute to safety and, indeed, that is what happened. There were four people in the plane, the three air crew and the pilot. Sadly, Fisher, aged 25 years, died.”

Leading up to Sunday’s ceremony, club members were able to track down a relative of Fisher’s, his cousin, Gordon Wilson, of Indian Head. He’s now 86 years old and, just a few years ago, travelled to Cold Lake to research any information he could find about the crash.

“Gordon also told us about another sad incident,” Rausch continued. “Howard was not the only pilot in the family. He had an older brother who served as a bomber pilot in the Second World War. He never returned. His plane went down over Germany, so the family sadly lost two boys in service.”

Meanwhile, Getzinger said, of the three men who parachuted to safety, one landed on a nearby hill and no doubt would have also witnessed the plane go down.

“It’s sad all around, but historic as well and that’s why I want to preserve the site,” Getzinger noted. “I’m kind of a history buff and because I grew up on the ranch I not only want to preserve the plane, but also turn the site into a sort of memorial. This plaque we’ve had made will remain at the site for years to come.”

“Barry was generous to share the story with us and (prior to Sunday’s ceremony) also took some of us to the site,” he said. “It’s inaccessible to most vehicles, but there’s no problem reaching it by horse or by quad. We did this mainly out of respect for somebody who showed incredible poise, who held it together to ensure his flight crew survived. We think that in itself is astounding.”