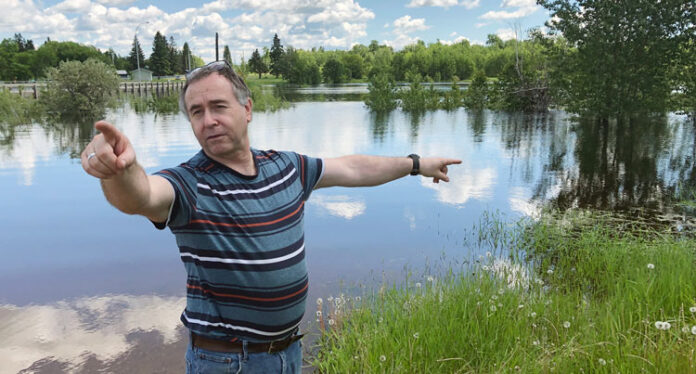 “It’s in the hands of God really.”

That’s what Mark Ramshaw, owner of Green Lake Gas and Grocery, had to say about the possibility his business could become completely flooded as a result of recent high water on the nearby lake as well as throughout the entire local watershed.

“I went away Friday (June 19) and, of course, the river was higher than normal, but it didn’t appear to be anything to worry about,” Ramshaw told Northern Pride when interviewed last Thursday (June 25). “I did hear they were sandbagging while I was away, and, when I got back Tuesday night (June 23), we were starting to see some flooding here. Our septic tanks were flooded.”

As of last week, the water in the lake had risen so high it was almost level with the bridge that passes through the community on Highway 55. According to Ron Podbielsky, a spokesperson for the Water Security Agency, the recent high water is the result of significant rainfall in the Green Lake area, as well as high flows on the Beaver River which were recorded June 3 and 4, as well as June 7.

“This resulted in a significant increase in water levels by about 90-100 millimetres,” Podbielsky said. “We’re talking about the entire watershed in that area of the province.”

“The high flow event making its way down the Beaver River is resulting in increasing flows below Green Lake,” noted a WSA news release. “Peak flows are expected in the Beauval area in early July and Lac Ile-a-la Crosse is expected to peak in mid-July. Peak flows on the system are exceeding or expected to exceed 2017 levels and approach the record levels observed in 1974.”

This was reiterated by Podbielsky.

“We are hoping the Beaver River has reached its peak, however, and water levels will start to recede from here on in, given, of course, there is no more significant precipitation,” he said. “The most important thing to keep in mind is personal safety. In situations like this you want to be extra cautious around the water, especially at the highway bridge in Green Lake which I understand sees significant foot traffic. People need to be extra careful when in that area.”

“There was some concern the bridge itself may even need to be closed if its structural integrity becomes at risk,” Podbielsky added. “Obviously this is something that is very concerning. You never know what the weather is going to do, but we are hopeful levels have neared their peaks and will start to recede soon. Again, this is a product of the whole watershed in the area – it’s happening all over and will continue to happen at other places in the coming weeks. The entire area is seeing these higher water levels.”

According to Green Lake’s deputy-mayor Jim Laliberte, village staff and community members have been working to make the volunteers who are helping to make sandbags more comfortable.

“We’ve provided them with portable toilets, while a lady from the community has stepped up to provide them with meals,” Laliberte said. “This has been an ongoing concern and we just hope the water doesn’t get any higher.”

Laliberte said warnings have been issued to the public advising them not to swim in or frequent the lake itself for any reason. This, he said, primarily has to do with the risk of contamination caused by the septic tanks flooding at the local store, as well as other contaminants that could have flowed in from somewhere else.

“We’re just trying to help out as much as we can and to keep people’s spirits up,” he added.

As for Ramshaw, he continued to monitor the situation closely heading into the weekend.

“I put a stone at the edge of the water yesterday (June 24) at 11 a.m.,” he said. “When I measured again this morning (June 25) the water had advanced by about seven feet. I put another stone this morning and now, just a few hours later, the water is about eight inches closer. I’ve never seen anything like this happen here before and I have been here 11 years. The river is actually flowing backwards. Normally it’s supposed to flow into the Churchill River, but the Churchill River system is so full of water, it’s got nowhere to go and so it’s filling up all these little tributaries.”

Ramshaw also said he is concerned the situation could get worse before it gets better.

“But, I can’t do a thing about it,” he said. “I don’t have flood insurance because they wouldn’t give it to me. When I was praying the other day, I told God He was my insurance, so we’ll just have to see what happens. We’re just holding in there and praying.”