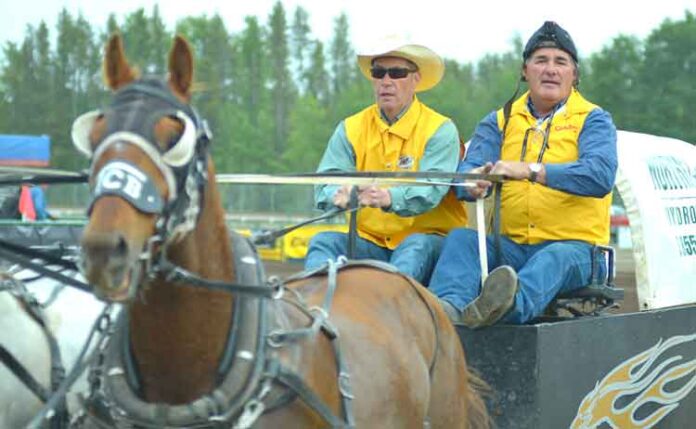 Chuckwagon racing is back… sort of.

“Our charity fun races, which are unsanctioned, will be similar to the races we recently held at Bear Creek,” explained CPCA driver and event organizer DJ King. “The races get underway Aug. 1 and 2 in Poundmaker and will continue every Saturday and Sunday for the following six weeks. All social distancing guidelines will be in effect, and the races themselves will be a win-win for everyone involved.”

The host communities, King added, will be able to put the money they raise toward initiatives of their choosing, the participating drivers will earn some funds to put toward their horses by gaining sponsorship for their wagons, while additional money raised will go to charity. While King has yet to announce exactly which charity will benefit from the races, he did confirm it will likely be something involving children.

“A lot of the charity work I do involves youth,” he said.

Following the initial race in Poundmaker, the tour will move back to Bear Creek Aug. 8 and 9. In the weeks that follow there will be stops in Dewberry, Little Pine and Onion Lake before things wrap up in Meadow Lake Sept. 5-6.

“It will be great to finish up in Meadow Lake because a lot of chuckwagon drivers are from this area and chuckwagon racing is such a huge sport here,” King said. “One driver in particular is Gary Gorst who, having reached the mandatory retirement age of 65, was originally scheduled to have his final season in the WPCA this year. Because of the cancellation, I don’t know if they will make an exception and allow him to drive again next season. If not, I want to make sure he drives at our event in Meadow Lake. It will be a nice farewell for him, a chance for him to tip his hat to the local fans and for them to cheer him on one more time.”

“These races are to support the host communities as well as charity,” Logan Gorst said. “It’s also a chance for us to get some new horses into some races. I won’t be able to make all the shows, but Rick Fraser has agreed to drive my horses while I am working. DJ has put a lot of effort into this, so I am sure the communities will come out and support this good cause.”