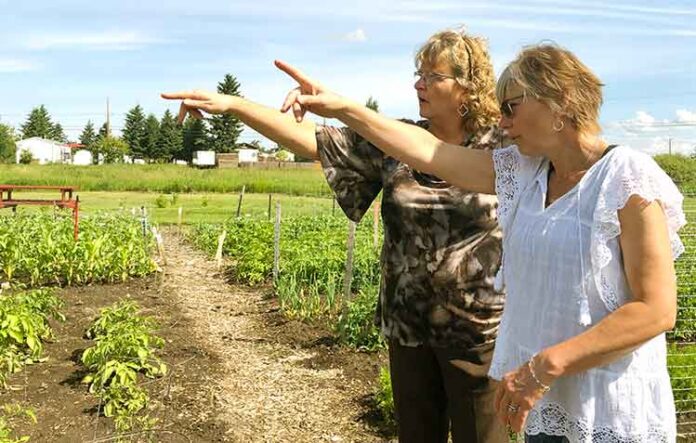 The Willow Creek Community Garden located on Meadow Lake’s east side is growing in more ways than one.

Tuesday (July 21), the garden received $26,000 from the Co-op’s Community Spaces program, money which will be used to not only expand the garden but to also add some new features that will benefit all those who frequent the facility.

“The Community Spaces program is all about giving back to non-profit groups in western Canada,” explained Meadow Lake Co-op general manager Caralee Strome. “The groups fill out applications which go to a central location. There’s different criteria that needs to be met including information about the project itself and how the community will benefit from it.”

According to garden coordinator Pat Morley, even though the money will be used to improve the garden area, it isn’t the garden or its growers alone who will benefit from the planned improvements.

“We have a lot of people who come out here, including young people from the Junior Forest Wardens and groups like that, as well as people who just want to walk and enjoy the space,” Morley said. “The pergola (an archway in a garden or park consisting of a framework covered with trained climbing or trailing plants) we are going to put in will create a shaded area. Right now there’s no shade out here at all. That’s just part of it, however. Our grant is for an entire expansion and enhancement project.”

Other aspects of the project include the development of a drainage trench, as well as extra garden beds.

“Each year, we experience a lot of flooding closer to the road (6th Street East) and that’s why we’ve never been able to expand the garden out that way,” Morley said. “We have also received a lot of requests for higher beds, so we’re going to extend our area to give people who don’t have the physical ability to garden in a low bed to have higher beds. There will also be larger pathways to allow for wheelchair access.”

Work is expected to begin soon, but it could take some time before everything is completed.

“It could take up to two years because our seasons are so short,” Morley continued. “We may not be able to get a contractor out here until the end of summer.”

She also said the garden remains as popular as ever.

“We have a waiting list,” she said. “We often have new gardeners who are quite exuberant at the beginning of the year who later decide they can’t handle the work involved, so there is some turnover in that respect. But, there’s always people who want to take those spots over right away. We didn’t have a lot of leftover space for community plots this year, but we do have some and the items we grow are so graciously accepted at places like the Door of Hope. That’s why we’re so excited to expand because we can bring more family services groups in.”

Strome, meanwhile, said it’s encouraging for the Co-op to be able to support groups like Willow Creek Community Garden.

“It’s fantastic to be part of this and to be able to help our community,” Strome noted. “This is a great initiative for our community.”