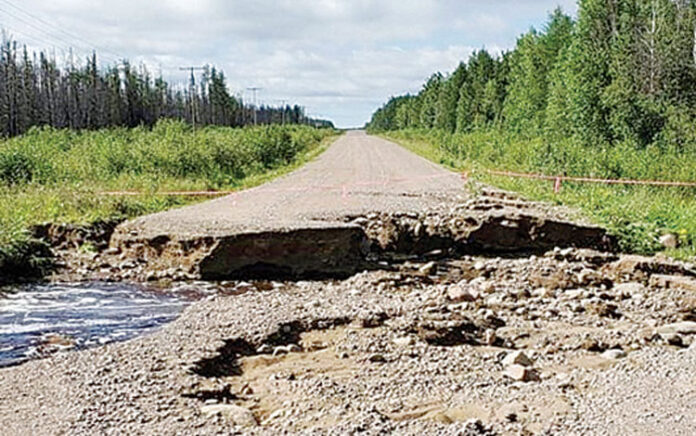 Heading to Patuanak? Bring a boat.

That’s what residents of the northern community, as well as nearby English River First Nation are jokingly advising visitors to do in the wake of two recent washouts on Highway 918 heading to and from the communities.

“On Saturday (July 25) we had quite a bit of rain – a torrential downpour really – that took out our road at two locations,” explained Katrina Maurice, a band councillor with English River First Nation. “Everyone has heard about the Beaver River this summer, how high the water is and about the potential for flooding, but this is something we have to deal with on an almost yearly basis. Our road is our lifeline, but over the years there have been many washouts ranging from minor to extreme in nature.”

According to Steve Shaheen of the provincial Ministry of Highways and Infrastructure, many parts of northern Saskatchewan have had significant rain this spring and summer.

“Some of these systems have been very intense and have dropped a lot of rain in a short period of time including the system this past weekend,” Shaheen explained. “Due to the rain over the weekend, there was flooding, which washed out at a couple of locations on Highway 918 to Patuanak. The locations are about 60 kilometres north of the junction of Highway 165 and another about 72 kilometres north of the junction. There is water over the road in some locations and debris is on the road.”

Shaheen went on to say, since Saturday, crews have been working 24/7 at repairs and will continue to monitor the situation.

“Typically, they have to wait until the water recedes before a permanent fix is made,” he added. “They were able to make repairs and reopened 918 Monday night (July 27)… but, apparently the road is closed again this morning (July 28) because of rising waters. They are working at repairs, but the situation remains fluid.”

Maurice, meanwhile, said the ministry did create a makeshift temporary road to allow traffic to still bypass the washed out areas. This, she said, is important because Highway 918 is the primary route for all essential services coming into the communities.

“Hopefully it’s fixed soon as the potential for danger is there whenever we have a heavy rainfall,” Maurice said. “It’s especially dangerous at night when it’s more difficult to see. In some cases, a washed out road may only look like a puddle when your headlights hit it in the night.”

Maurice expected the highway to be repaired and reopened by the middle of this week.