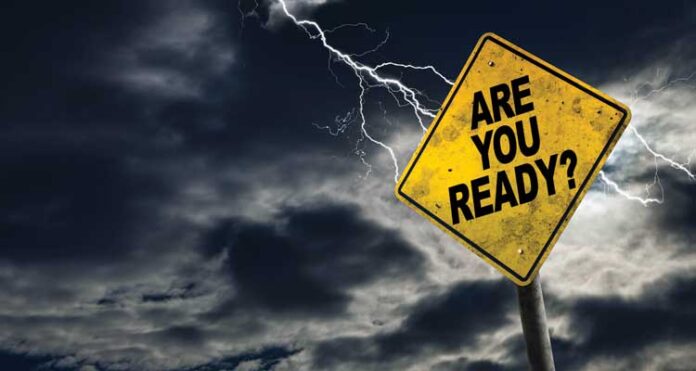 Last Thursday’s tornado warning for Meadow Lake and area may have proven to be a false alarm, but – when it comes to potential emergency situations – officials say it’s better to be safe than sorry.

The tornado warning was issued by Environment Canada shortly after 6 p.m. July 23 and televised news reports took the warning serious enough to encourage residents to seek shelter in their basements. In the end, however, the area experienced what appeared to be nothing much more than a heavy rainstorm.

“We did get reports of golf ball-sized hail, so I wouldn’t quite classify it as just a rainstorm,” stated Terri Lang, a warning preparedness meteorologist with Environment Canada. “The wind didn’t get too high though – only to about 70 km/h. The reason why a tornado warning was issued was because forecasters saw a storm quickly growing stronger on the radar and they could also see it was starting to rotate. When a storm starts to rotate quickly, that’s one of the first signs the storm could spit out a tornado.”

Lang went on to say Environment Canada also received an email from an unknown source claiming to have seen a funnel cloud over Meadow Lake, but there was no evidence to substantiate this.

“We do plan to use Twitter to reach out to the public to see if anyone is aware of any actual evidence of a tornado or to see if the storm caused any serious damage,” she added.

In the meantime, Lang said it’s critical to follow all necessary safety requirements when such warnings are issued.

This was echoed by Meadow Lake fire chief Neil Marsh, a local expert on emergency preparedness.

“Since tornadoes are rare here, many people will be unfamiliar with what is required in order to stay safe,” Marsh said. “The main points, as with any type of disaster or emergency, include being aware of the potential for a specific disaster event to happen, and being informed about the effects of each particular type of event.”

“Take advantage of all available means of finding out about impending emergencies and other critical events such as SaskAlert for extreme weather such as tornados and Voyent Alert for local emergencies,” he said. “Also, discuss emergency preparedness with your family and co-workers. It’s better to have conversations about what your family will prioritize during an emergency before the emergency actually happens. Once you have a plan and know what your resources are, live your summer. We all know in Saskatchewan worrying about the weather won’t do anything to change it.”

“Some people like to say this isn’t the case in the North, but we do know for a fact major storms do go through that region,” she said. “We don’t always report on it, however, because we’re not always aware until after the fact. People will post evidence of such storms on Facebook, but Environment Canada is not on Facebook. Meanwhile, we’re still in the severe storm season. It could be the end of August before things start to taper off, so we’re still in the midst of it.”

Information on how to prepare for and to react during a tornado can be found online at the official website of the Red Cross, as well as at the government’s site, www.getprepared.gc.ca.