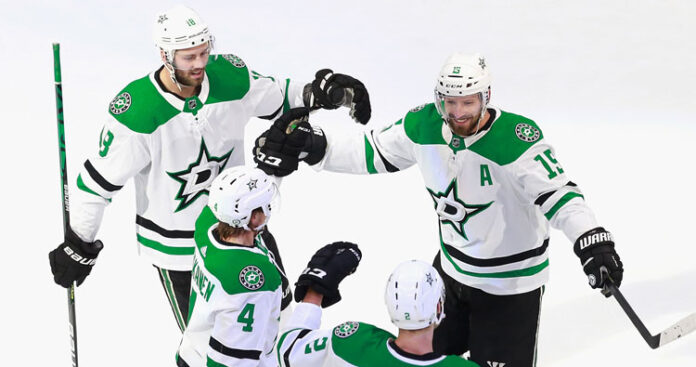 In spite of the many twists and turns 2020 has created for everyone, this could be Blake Comeau’s year.

Comeau, a former Meadow Lake resident and current member of the National Hockey League’s (NHL) Dallas Stars, is optimistic about his team’s chances of winning the Stanley Cup after the regular season was cut short because of COVID-19. As of this week’s sports deadline, the Stars were up two-games-to-none over the Colorado Avalanche having already eliminated the Calgary Flames in the opening round.

“I think we have just as good chance (of winning) as anybody who is left playing,” Comeau told Northern Pride. “We have a veteran team, an older team, and I feel we’re one of the better defensive teams in the NHL. You’ve seen it before with previous teams that have won the Stanley Cup – they’ve played pretty good team defence, and we also have some really elite players on our team who can put the puck in the net as well as really good chemistry within our group.”

Comeau, 34, went on to say, as he gets older, he realizes how difficult it is to make a long playoff run.

“And, obviously, by not winning the Stanley Cup after being in the league this many years proves it’s not an easy thing to accomplish,” he said. “I feel very fortunate to be in the position we’re in. Hopefully we can play some really good hockey and finish this thing off with a Stanley Cup.”

While this marks Comeau’s second full season with the Dallas Stars, he’s been a fixture in the NHL for the past 14 years. He started in New York with the Islanders, then moved on to Calgary for a year, Columbus the following year, Pittsburgh for a year, followed by three years in Denver (Colorado) before joining the Stars. This season his main role has been penalty killing, while his experience and longevity have also been recognized by his peers. He proudly wears the letter ‘A’ on his jersey signifying his role as an alternate captain.

As for the ongoing NHL playoffs, Comeau said it’s exciting to be able to compete again after such a long layoff. The NHL cut its regular season short when the COVID-19 pandemic was declared back in March of this year.

“It’s definitely been a bit of a wild ride since March,” Comeau added. “It was an optional day as far as going to the rink that morning, but we were supposed to have a game that night and I planned on taking my daughter down to the rink with me because not a lot of the guys were going to be there. That’s when we got word things were shutting down. For the first couple months there was really no direction, and we found ourselves locked down in Dallas – it was a crazy time.”

Comeau and his family (wife Lacey and daughters Zoie, Finley and Rowan) usually return to Kelowna for the summer, but decided to stay in Dallas to avoid having to be quarantined.

“I was very fortunate,” he said. “One of my fellow players has a gym set up in his garage, which was a two or three-minute drive from my house. So, a group of about four or five of us were still able to work out together. Eventually we had ice available and could get back skating. For my situation I was pretty lucky to have what I had, and, once we got everyone back to Dallas, got training camp going, and once we got used to the masks, the testing and so on, it was business as usual and the focus became getting ready for playoffs.”

Comeau said he is impressed the NHL has been able to get to the stage it is at now. He is also pleased with his team’s efforts thus far.

“So far we’ve played some pretty good hockey,” he said. “ We’ve put ourselves in a really good position going up 2-0 over Colorado right now. We just have to keep playing our game and keep doing what we’re doing. Obviously they’re a great team and you need to win four games to win the series, but like I said we’ve put ourselves in a good position and we just need to keep our focus.”

However, one thing that took some getting used to at first, Comeau said, was playing games without any fans in the arena.

“It was a little eerie during our first exhibition game when we were warming up and there were no fans,” he said. “That means there is no atmosphere when you play. Normally during playoffs, the atmosphere in the arena is pretty intense, pretty crazy, but, honestly, once you start playing, you don’t really notice because you’re so focused on the game. Everybody just knows what’s at stake, so you don’t notice not having the fans for the most part.”

Comeau also expressed his gratitude for his many fans from his hometown of Meadow Lake who continue to follow his career.

“Growing up in Meadow Lake, going through the minor hockey system, all the support I had, and all the coaches who helped me along the way, it was a great place to live and to develop as a person and as a hockey player,” he said. “I’m very fortunate to be where I’m at and there was a lot of people who helped me get here. I’ll always have a spot in my heart for Meadow Lake. I have a lot of great memories from my time in that community and I was very fortunate to grow up there.”