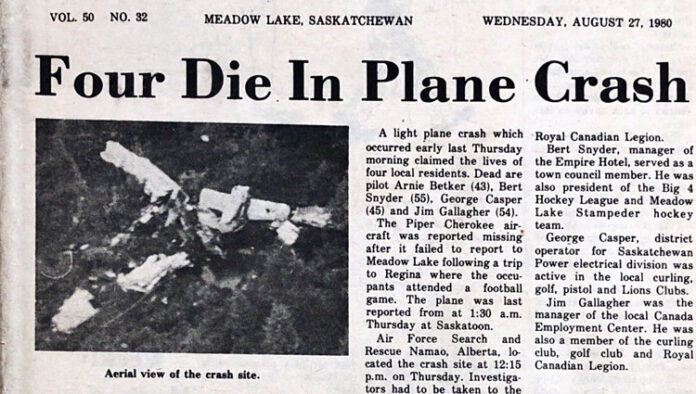 Nearly 40 years after his father and three other prominent members of the Meadow Lake community perished in a plane crash, Kevin Casper finally had a chance to provide a proper thank you to the military search teams that responded to the tragedy.

“They had gone to a football game in Regina to watch the Riders,” Kevin Casper, who now resides in Calgary, told Northern Pride. “They were all avid football fans and it was a really big deal for four blue collar guys to fly to Regina, watch a football game and fly home. They were so excited about it and it was all going 100 per cent according to plan except for the last 20 miles. On the way back, difficult weather conditions overcame them and they crashed.”

Casper, who was 20 years old at the time, said the plane was scheduled to arrive in Meadow Lake around midnight.

“When they didn’t return by the early morning hours, we knew something was terribly wrong,” he said.

This was echoed by Arnie Betker’s widow, Mary, who still lives in Meadow Lake.

“You just don’t expect something like that,” she said. “You expect they’ve landed somewhere because they’re having trouble with the plane or they forgot to close their flight plan. But, when I started phoning around to the other ladies whose husbands were involved, I started to panic a bit and to wonder what really did happen.”

The authorities were notified and, within hours, 435 Transport and Rescue Squadron dispatched a CC-130 Hercules from Canadian Forces Base Namao. By midday, the downed plane was spotted in heavy bush about 20 miles southeast of Meadow Lake. Two search and rescue techs parachuted into the crash site and confirmed the four men had indeed been killed. Meanwhile, 417 Combat Support Squadron from CFB Cold Lake deployed a CH-118 Iroquois helicopter to ferry a local RCMP member as well as the acting coroner, Dr. Merv Johnson, to the crash site and to also recover the search and rescue techs.

“I got a call that morning from search and rescue saying they had found the airplane south of town,” Johnson recalled. “They came to Meadow Lake with a helicopter, picked me up, and took me and an RCMP officer to the site. They let us off at the edge of a swamp. We looked over the site, collected the bodies and brought them back to Meadow Lake after a few hours… We knew who was in the airplane – I actually knew all four of the fellows.”

Johnson went on to say Joan Casper – George Casper’s wife and Kevin Casper’s mother – worked at the clinic in Meadow Lake at the time, which made telling her the news of her husband’s death all the more difficult.

“I remember going and talking to her, and her kids were around,” he said. “It was probably one of the worst days of my life back then. I hadn’t been in practice terribly long at that point. I also remember informing the other families of what happened. There was just a pall on the town because these were well-known men here and the whole town seemed to go into a depression. Each one of them was well-known and had an important position in town, so it really hit everyone hard.”

Arnie Betker was the owner of Marshall Wells and Rae Allan Furniture and also served as commanding officer of the local air cadet squadron, was a past-president of the Meadow Lake Lions Club, a justice of the peace and a member of the local Legion. Snyder managed the Empire Hotel and was a member of town council, as well as president of the Big Four Hockey League and the Meadow Lake Stampeders hockey team. George Casper was a district operator for Saskatchewan Power’s electrical division, and Gallagher was the manager of the local Canada Employment Centre.

“It was both a difficult yet heart-warming experience at the same time,” Kevin Casper said with regard to the aftermath of the crash. “All four were very active men in the community. They were involved in the Lions Club, the fish and game and pistol clubs, curling leagues, they were members of the golf course – you name it and they were involved in it. Their loss had quite an impact, but the one thing I will never forget is pretty much all the retail businesses along Centre Street shut down that Saturday. I don’t ever remember another event where that happened, either before or since.”

Casper also said the football trip was a one-of-a-kind event for the foursome and they had never really taken flights together before. Mary Betker confirmed this.

“They had planned to go the week before, but with the weather being inclement, my husband changed his mind and said he wouldn’t fly in weather like that, so they decided to go to the following game,” she said.

The night of their return trip, however, turned out to still have heavy cloud cover, low light conditions and poor visibility.

“Arnie had been flying for a few years,” Betker continued. “At the time, a lot of people said they hit the tower, which is totally untrue. The way the person from the Department of Transport explained it to me was, during the evening in the summertime, when you’re flying over forest, fog comes up from the swampy areas… what they concluded was Arnie became disoriented and thought he was taking the plane up, but, in fact, the plane was coming down. The reason they interpreted it this way is, when they did the autopsy (on my husband), they determined he had not panicked – there was no sign of his adrenaline having been up. I don’t know if they did an autopsy on any of the other men, but they did on my husband.”

‘It was a long time saying thank you…’

In the decades since the incident, Kevin Casper said he has thought of his father and the other men often and, for years, wanted to formally thank both 435 Transport and Rescue Squadron and 417 Combat Support Squadron for their involvement in search and recovery efforts.

“I know how difficult the terrain is in this country,” he said. “In the years following the crash, I learned many planes have gone down throughout Canada and other parts of the world that have never been recovered, and which have never even been found. The fact they found this plane within hours was really quite remarkable and fortuitous. For years I wanted to say thanks to the people involved, but – when you’re 20 years old – you don’t walk up to a military base and say, ‘I want to speak to the guy in charge’. That was plan ‘A’ and I didn’t have a plan ‘B’.”

All Casper knew was a Hercules airplane was involved which came from the Namao airbase north of Edmonton. But, that base had since been closed and he didn’t know what happened to the search and rescue squadron.

“In the early days of the Internet I would try to find out what happened to the search and rescue squadron from CFB Namao,” he noted. “I would get nothing, I would try two years later and still get nothing, and so on and so forth. Eventually, I gave up on being able to say thanks. Then, a couple years ago, I went to work for a company that has operations on the Cold Lake Air Weapons Range. By way of that, we have a relationship with the Cold Lake airbase and the commanding officer therein. I was at the base on a business trip in 2018, and I happened to meet the deputy commanding officer. I took him aside, told him the story and he said it’s not a problem because that squadron moved to Winnipeg and his buddy was the commanding officer. In a moment it went from something that was impossible to something that was so easy.”

Last fall, Casper was able to provide plaques to both squadrons as an appreciation for their efforts.

“It was a long time saying thank you, but I was finally able to do it,” he said. “It was just a matter of good fortune and good timing. These are a brave group of men and women who rarely find out what happens after the mission closes out. They were quite appreciative to hear the story. History and heritage is very important to the military and, even though none of the people currently serving in those squadrons would have been there 40 years ago, just the fact they have the commonality of being part of the same squadrons means they too accomplished that mission. They own it. They’re part of the history and part of the heritage.”

Looking back on the crash all these years later, Casper said it was an unfortunate thing, but he takes some solace in knowing his father and his friends died together while doing something they enjoyed.

“As unfortunate as it was, they were doing something they truly loved,” he said.

Mary Betker agreed, but said the loss of all four men left a gap within their families and within the community that can never be filled.

“It was sad,” she said. “You think back about how young they were, and the fact they never did get to meet their grandchildren.”

The Betkers had two children together.

As for Johnson, he said the incident is still a strong memory which he can picture clearly to this day.