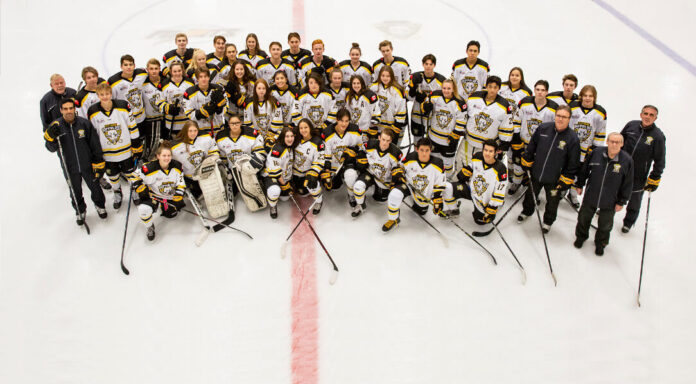 Three teenage hockey players from this corner of the province are ready to take things to the next level – some 1,056 kilometres from Meadow Lake.

When the new school year gets underway this fall, Meadow Lake athletes Martina Desjarlais and Easton Debray, along with English River First Nation’s Kylie Lariviere, will be enrolled at the Pilot Mound Hockey Academy in Pilot Mound, MB. According to Desjarlais, who enters Grade 12 this fall, the chance to gain an education while also progressing in her chosen sport is too good of an opportunity to pass up.

“One of my former coaches, Clay Debray, was approached by Rod Collins (general manager of the Pilot Mound Hockey Academy) to see if there were any players he could recommend who might be interested in going there,” Desjarlais told Northern Pride. “Clay brought up the idea to me and talked to my mom (Loretta King) and I all about it. We thought about it for about a week or so, and then spoke with the people from the school itself to learn more. Over the next few days I gave it some more thought because, at first, it was hard to say yes or no. It would be a great opportunity, but it’s also so far away. In the end I decided to go because I am sure it will be a great life experience.”

Pilot Mound is located between Brandon and Winnipeg. The academy itself is an academic based,10-month hockey school.

According to its official website, the school’s intention is to continue to grow as a highly successful entity, developing elite hockey players, grounded in academics and most importantly developing overall good human beings.

According to Debray, when approached by Collins, he knew the Pilot Mound Hockey Academy would be a chance for a number of local athletes to further develop their on-ice skills while also gaining a solid education.

“Education comes first, but this school is designed to look out for the student athlete,” he said. “The students live in a dorm-like setting, go to school during the day, but also practice hockey during the day and hit the gym for training – it’s all part of their overall schooling.”

Easton Debray, who is entering Grade 11 this fall, is Clay Debray’s son. Up until the onset of the COVID-19 pandemic, he was attending the Prairie Hockey Academy in Caronport (near Moose Jaw). Meanwhile, Lariviere was enrolled at the Banff Hockey Academy in Banff, AB last year. As for Desjarlais, she was a member of the Northwest ‘AA’ Sharks in North Battleford last season.

“I started playing hockey at age five and played minor hockey in Meadow Lake before joining the Sharks,” Desjarlais said. “The season was cancelled before the playoffs because of COVID-19.”

Desjarlais went on to say she is looking forward to attending Pilot Mound Hockey Academy because the action itself will be “more intense.”

“We will go to school for about four hours each day and then head to the gym to train and to the rink for hockey – it’s more like ‘AAA’ calibre, and it will give me more opportunities going forward.” she said. “I’m looking forward to building friendships and learning new skills, and to becoming a better hockey player”

“I would recommend such an opportunity for any kid looking to combine their school routine with the sport of hockey,” he said. “If there’s a way to do it, I will always help young hockey players get to the next level.”