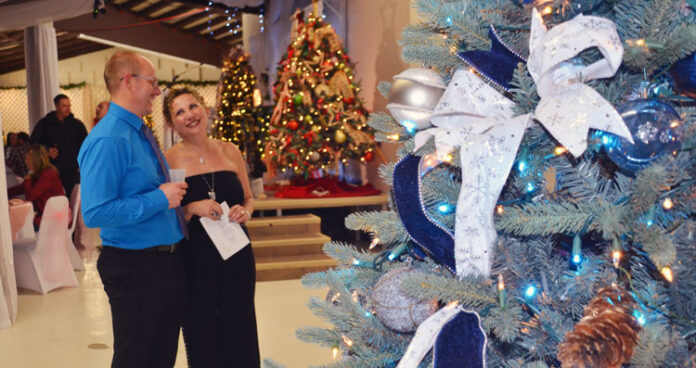 The buildup to Christmas could be a lot quieter than normal in Meadow Lake this year.

For the first time since its inception, the Meadow Lake Hospital Foundation will not be hosting its annual Festival of Trees event next month, but that doesn’t mean there won’t be an opportunity for members of the community to still lend their support to the foundation’s cause.

“It was decided this year’s Festival of Trees would be a no go by late summer,” explained Meadow Lake Hospital Foundation chair Tony Vandenberg. “With the ongoing COVID-19 pandemic, a gathering of 250 or more people just couldn’t be done, and that’s why we’ve decided to do something different.”

Instead of the traditional dinner, as well as silent and live auctions at the Meadow Lake Civic Centre, the event has evolved into an online auction.

“So far, the response in terms of those willing to contribute items for the auction has been incredible,” Vandenberg continued. “We are now at the point of gathering up all the items, and they should all be photographed and ready to be posted to the auction site (32auctions.com) by the end of the month.”

Those interested in bidding on items can visit the auction site, create an account and browse the listings before making a bid on whatever items catch their eye. According to Vandenberg, the auction will begin once the items are posted in early November.

“The items will also be promoted via the radio, while the auctions for certain items will begin to close Nov. 23 up until Nov. 27,” he added. “We hope to raise as much money as we can, but the target is $100,000, which is the goal we aim for with the Festival of Trees each year.”

Money raised from the auction will go toward the purchase of equipment for the local hospital. Dr. Gavin Van de Venter, chief of staff at the hospital, said the contributions made by the foundation go a long way with improving local healthcare.

“For example, we have ordered a new piece of equipment called a LigAsure which will make it possible for us to now, and for the first time, be able to do laparoscopic work in Meadow Lake,” Van de Venter noted.

Laparoscopic or “minimally invasive” surgery is a specialized technique for performing surgery. In the past, this technique was commonly used for gynecologic surgery and for gallbladder surgery. Over the last 10 years the use of this technique has expanded into intestinal surgery.

“We will now be able to use a camera in the removal of gallbladders and so on, which we were not able to do before,” Van de Venter reiterated.

“The up-to-date technology they have at the hospital definitely played a big part in my decision to come here,” stated Dr. Reed Gillanders, one of several new doctors to arrive in Meadow Lake earlier this year. “As a recent graduate, oftentimes we would train with the latest and greatest technology, so it’s nice to come to a small town and still have that tech available.”

Gillanders said the hospital also has a “really nice” piece of ultrasound equipment which he utilizes greatly.

“At the end of the day, we all want to be able to provide good care, and having the best technology possible goes a long way in allowing us to do that,” he said. “I’m also impressed with the amount of money the local hospital foundation raises each year.”

As for the auction, Vandenberg said there will be about 30 items up for grabs.

“We’ve had to adapt, diversify and recreate,” he said. “We look forward to the challenge of our new event and are certain the public will enjoy it as well.”