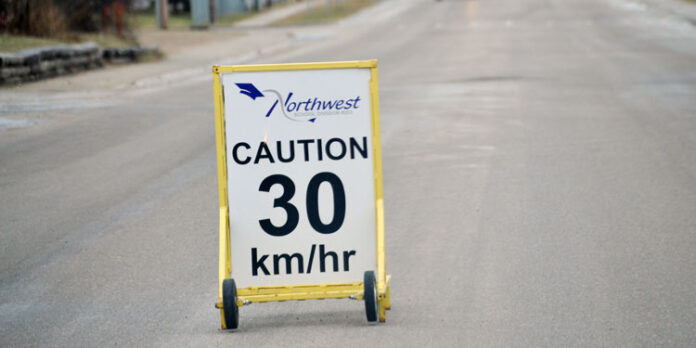 At least one Meadow Lake motorist has been given a failing grade by Gateway Middle School and the Northwest School Division.

NWSD communications officer Kaitlin Harman confirmed reports of a recent incident that saw a driver zip by the school located on 5th Avenue West at a speed much higher than the posted 30 km/h common in all school zones throughout the community.

“The incident happened Wednesday, Oct. 21 at approximately 9:30 a.m.,” Harman said. “It was reported to the RCMP right away and police looked at the security footage from the exterior of the school to try and identify the vehicle.”

According to police, there was not enough evidence at this time to lay charges. However, the RCMP was able to comment on the penalties for speeding through school zones.

“The Traffic Safety Act notes the base fine (for speeding in a school zone) is $170 dollars and rates continue to rise quickly with even 10 km/h over the posted limit being a $270 dollar fine,” explained Cpl. Kelly Dinsdale of the Meadow Lake RCMP.

An initial account of the incident provided to Northern Pride, however, suggested the vehicle was travelling at least 80 km/h, resulting in the driver running over the metal ‘30 km/h’ sign the school places on the street each morning before blowing though the nearby four-way stop. Pieces of debris were reportedly all over the street.

Although he did not witness this specific incident, City of Meadow Lake community safety officer Joe Hallahan regularly patrols school zones during peak times and said he has witnessed his fair share of motorists disobeying the law and potentially putting students and others at risk.

“School zones are one of the priorities set by the city’s bylaw department,” Hallahan said. “The main issue we encounter is speed. In the last month, we conducted 24 stops in school zones for speeding alone. That’s the big one for us, but another concern is the fact many schools have restricted parking zones across from the schools themselves. Parents are not to be stopping here to drop their kids off because it means the kids then have to cross the street to get to school. We still see a number of people doing this.”

Hallahan went on to say another issue the bylaw department encounters from time-to-time is distracted driving.

“Whether it’s people on their cell phones or otherwise not paying attention to the road for some reason,” he noted.

Harman said it is concerning to the NWSD to have any vehicles travel through school zones at dangerous speeds.

“We are thankful no one was injured,” she said.