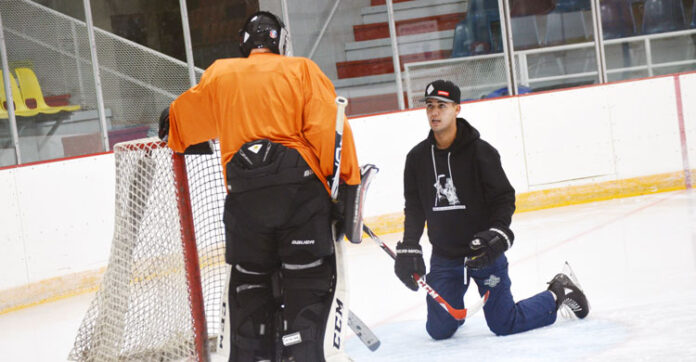 “We’re only allowing in a limited amount of people, but it’s a way for me to come back and to help these goalies by showing them some of the things I’ve learned over the years,” Ross told Northern Pride prior to Saturday’s event. “With all the opportunities I’ve had, hopefully I can give a little back to them and show them a few things about goaltending.”

The program took place Saturday (Oct. 24) at the Meadow Lake and District Arena.

“The groups will get on the ice twice that day,” Ross added. “It’s mainly geared toward younger kids, but there are some older kids also planning to take part. There will be around 24 participants throughout the day.”

Among those on the ice was 14-year-old Wyatt Gardipy of Beardy’s and Okemasis’ Cree Nation.

“Wyatt really looked forward to the camp,” remarked Gardipy’s mother, Meghan. “He’s only been playing goal for four years and follows Roddy’s story of being a late bloomer. He looks up to Roddy as a First Nations role model, and was excited to be on the ice with him.”

Meghan Gardipy went on to say her son had a great time at the training session and enjoyed the one-on-one time he had with Ross and the other instructors.

“It was a great way for them to give back to minor hockey,” she said. “Wyatt would definitely attend again if given the chance.”

Another youngster to participate in the training session was 10-year-old Kyxton Moore. His mother, Lisa, said Kyxton was very excited to be involved.

“It was a great opportunity for him to spend some time on the ice with a local goalie and one he looks up to,” she said. “He came off the ice at the end with a smile and said, ‘Roddy Ross said good luck this season.’”

Ross, meanwhile, said it means a lot to him to meet the young athletes who signed up for the program and to see how determined they are to move forward with their hockey careers.

“To be able to show them some of the things I have learned over the years means a lot, and, hopefully, it will help them to achieve greater success down the road,” he added. “I’m excited to do it.”

“Right now I live in Saskatoon during the weekdays, and I also train there,” Ross said. “I get weekends off, but right now everything is up in the air as far as hockey goes (because of COVID-19). We’re just waiting on what the word is with the WHL and when we get to return to our teams.”