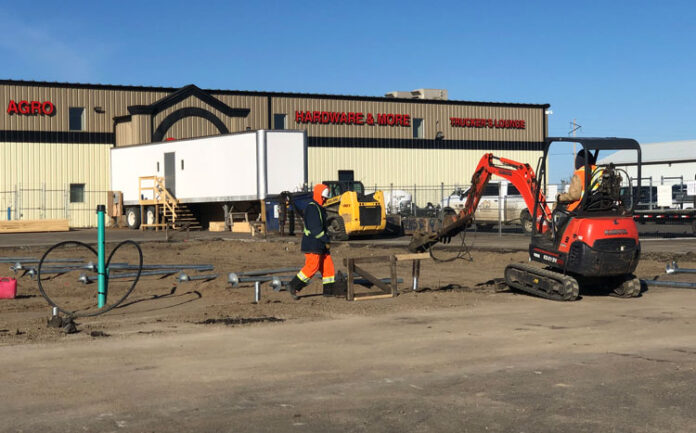 It won’t be long before the Meadow Lake Co-op will be able to propose a toast to the completion of its latest endeavour.

Construction is currently underway on the Co-op’s new, 4,200-square-foot wine, spirits and beer outlet, which will be located in the southeast corner of the Meadow Lake Co-op Service Centre parking lot.

“The project is expected to be completed by spring of 2021,” remarked Meadow Lake Co-op general manager Caralee Strome.
Strome went on to say the decision for the Co-op to open its own off-sale liquor outlet boils down to one word – opportunity.
“We had the opportunity to purchase an existing liquor license in the fall of 2019,” she said. “This venture will provide new jobs to the community, return profits to our members and provide a service of products and selection to our customers in a new, safe and convenient location.”

Originally, the Co-op filed an application with the City of Meadow Lake for a renovation/addition to the Service Centre. Last spring, however, they came back to the city with a revised plan for a separate building.

Meanwhile, another well-established business in Meadow Lake is undergoing a major facelift, something the owner hopes will help improve the service he provides and also clean up the location in more ways than one.

“It’s a big project – a complete and total renovation from the ground up,” stated Bucktaraj Napaul with regard to the current renovations underway at the Empire Motor Hotel and Motel on 1st Street East.

According to Napaul, the hotel is being entirely gutted.

“It’s going to be like a whole new building,” he added.

However, this was not the plan in the beginning. Things got started in May with some minor renovations, but Napaul said he quickly found myself faced with some challenges which prompted him to make the decision to go big or go home.

“I want this building to be fully up to standards because that’s just the way I do business,” he said. “Things need to be done right and they need to be done nicely… I’m not going to keep spending money on small repairs here and there.”

The hotel has 31 units with the upper floor being renovated first.

“Once this project is finished there will be no long-term residents anymore – it will be much more like a traditional hotel.”
Work is expected to be completed some time in 2021.

Napaul, who has overseen the hotel since 2017, took on full ownership in March of this year.

In addition to the Co-op’s new business and improvements at the Empire, a number of new businesses opened their doors in Meadow Lake for the first time in the past year. Some of these include the Rose Garden – a fully licensed restaurant located adjacent to the Empire – as well as Little Caesar’s Pizza, Flat Out Small Engines, The Fitness Lair, Comfort Denture Clinic and Meadow Vape among others.

According to Trevor Dignean, administrator with the Meadow Lake and District Chamber of Commerce, all of these examples represent great news for the community.

“It’s definitely very surprising how strong the Meadow Lake business community has remained throughout this whole pandemic,” Dignean said. “Meadow Lake hasn’t really skipped a beat – we still have new businesses opening up, while many of the existing businesses have become innovative.”

Dignean also acknowledged the continued support given to these businesses from residents.

“This is a testament to the support our community has shown – it proves more people are getting what they need here at home rather than going through with an online purchase.”