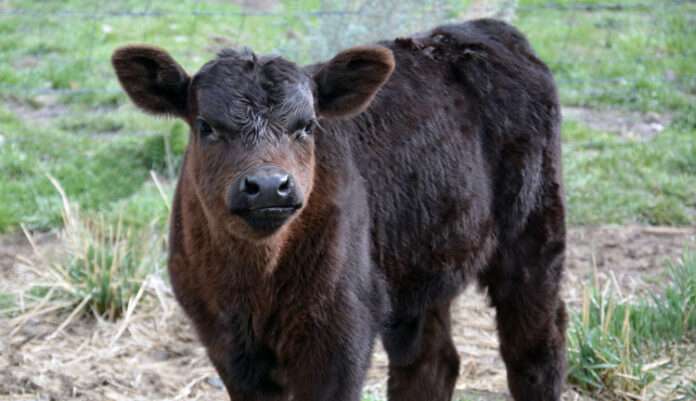 Recently, Degenhardt announced he is offering a $500 cash reward for credible information about his heifer calf which was shot dead Oct. 25 between dawn and 10 a.m.

“I was chopping holes in the dugout for the cows when I saw one of the calves lying on the ground about one eighth of a mile east of our yard site,” Degenhardt told Northern Pride.

When Degenhardt went to inspect the situation, he soon discovered the eery truth.

“I rolled it around and started to examine it – I started to skin it out to see what it died from, and that’s when I discovered a bullet in its head,” he said. “I was pissed. It’s hard enough keeping these critters alive.”

Degenhardt’s herd was along the Hinterland Road when the shot rang out. However, details are few and far between in terms of who is responsible for the animal’s untimely demise.

“My neighbour had left early that morning, so didn’t hear anything,” Degenhardt added. “It also just so happened to be the one day I didn’t get outside early too. It was just shitty luck as far as timing goes.”

While the loss of the calf will lightly set Degenhardt’s operation back financially, he said he’s more concerned about the safety issue such action causes rather than how much money he will lose out on.

“Cattle are relatively inexpensive right now, so it doesn’t set me back a whole lot – maybe about $1,000 – but I’m more concerned about safety more than I am about losing money,” he reiterated. “The worst part is how close it was not only to our yard, but to our neighbours’ as well. Nobody wants to see their equipment, their yards or, God forbid, a child accidentally shot at because of behaviour like this.”

The Pierceland RCMP was notified of the incident.

“Police attended the scene, as did members of SERM (the provincial Ministry of Environment),” Degenhardt said. “I haven’t heard anything yet and I probably never will, but I put up a reward of $500 anyway just in case anyone is able to provide me with some information as to who is responsible.”

According to Cst. Charles Gladue with the Pierceland RCMP, the investigation into the calf’s death is ongoing.

“We don’t have any suspects at this time,” Gladue said.

Gladue did add, however, this type of crime is taken seriously.

“This sort of thing is definitely a concern for sure, and that’s why we encourage everyone to contact us any time they observe something suspicious,” he said. “We have a better chance of dealing with something as it’s happening than days or even weeks after the fact.”