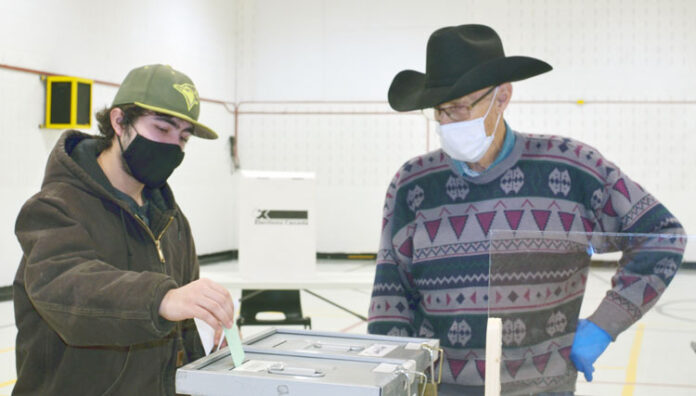 Jeremy Norman is ready, willing and able to continue serving his community.

Norman was re-elected chief of Flying Dust First Nation Saturday (Dec. 5), earning 319 votes to fellow candidate Michael Matchee’s 111. According to Norman, a big part of why he received so much support is because band members are happy with the work he and his fellow council members have been doing the past four years, and are pleased with the accomplishments Flying Dust has earned throughout that same period.

“We had a strong team and have done a lot of positive things in the community – many of which are things that were never done here before,” Norman told Northern Pride.

Norman said, in the last four years, Flying Dust has witnessed the creation of much employment as well as the implementation of a number of business ventures.

“We also got a community safety officer (CSO) program added to our justice program, which means a little more enforcement in the community,” he added. “We expanded on the arena to include a pro shop, and we purchased some land south of Saskatoon for some residential as well as commercial development. That is in the works right now.”

Norman went on to say this will be a bonus for members living off-reserve, stating things could be ready to go as early as three years from now.

In terms of youth, Norman said much as been accomplished, but there is still a long way to go.

“We still want to put up a youth centre, but just not quite there yet,” he said. “Thankfully, there is a lot of different programs our recreation director is doing – things like horse therapy and all the different trips such as canoe trips, bike trips, hunting trips, youth camps and more. We also completed the expansion to our school. It was a Kindergarten to Grade 4 school, but now it’s Kindergarten to Grade 8.”

Norman is the son of former Flying Dust chief Jim Norman and his wife, Brenda. Together, with his wife, Shauna, Norman has five children – Shavon, Shanelle, Jerome, James and Joseph. Norman worked as recreation director for Flying Dust for 12 years and served as a band councillor for six years before being elected chief in 2016.

“A lot of his background is working in camp jobs, different labour jobs,” the chief noted. “He was recently working for us in operations and maintenance. He’s definitely an honest person and a hard worker. That’s why he had a lot of support… the fact he is a hard worker.”

“I believe they (voters) wanted that consistency,” Norman remarked. “They wanted to keep the momentum going. A lot of the people were happy with the way things are being run on the reserve.”

Norman also said it isn’t just council responsible for the community’s ongoing success, but the members themselves as well as Flying Dust staff.

“Your team is not just the leadership,” he said. “If the people under leadership don’t work hard for the community you’re not going to get results. We’ve all worked hard these last four years.”

There are a little more than 1,000 eligible voters from Flying Dust, with 436 votes being cast in the recent election. Of these, six ballots were rejected – four for council members and two for chief.

“I would like to commend everybody who ran,” Norman said. “When you run, you put yourself out there for attack, and we had a lot of strong candidates. I commend those who wanted to step up and serve their community. I want to thank everyone who supported me as well.”

by Phil Ambroziak
With files from Terry Villeneuve