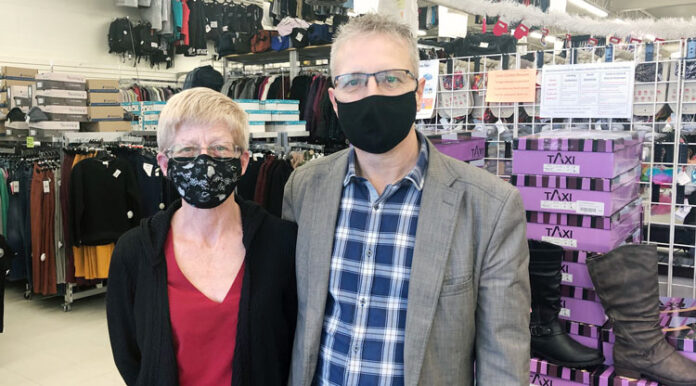 That’s what many throughout the local business community were thinking when last Thursday (Dec. 3), the Meadow Lake and District Chamber of Commerce announced the winners of its long-delayed 2020 Business Excellence Awards. Originally, this year’s MLBEX Awards gala was planned for March, but the COVID-19 pandemic resulted in the event being postponed and the winners ultimately being announced in the form of a video package posted on the Chamber’s Facebook page.

“Unfortunately we can’t do what we planned on doing because of the COVID-19 pandemic, but we do have some excellent awards to give out tonight,” stated Chamber president Evan Haubrich during the presentation. “Hopefully we can have something even better planned for next year. We were all disappointed this pandemic put a wrench in our plans, but one thing it didn’t do was take the shine off the excellence Meadow Lake has to offer.”

The big winner of the night was Martodam’s The Clothing People, which was named Business of the Year for 2020 – the same year that marks the store’s 25th anniversary.

“I want to congratulate all the other nominees,” noted store owner Dave Martodam when contacted by Northern Pride. “There are so many other worthy businesses out there, and that is one of the reasons I am so humbled. There are so many great businesses to pick from in town here, all of which could have received this award.”

The other nominees included Rise Up Health and Fitness, Eatery On Main, Nu Line Auto and Aurora Cinemas.

“Thank you to the Meadow Lake and District Chamber of Commerce for keeping things afloat with all the difficulties of trying to do things online,” Martodam continued. “I would like to reiterate a point I made in my acceptance video and that is, although the customers are the most important part of any business’ success, equally as important are the frontline people. There are too many to mention, but there are some who have been working here for a while. They’re like family. It is a family business and we like to have families shop here.”

Martodam also said the business is very important to his entire family, noting his daughter, Jessica, and her husband, Nori, manage and operate the main store, while his son, Jonathan, manages the Work and Western store located next door.

Martodam’s wife, Janet, echoed much of what her husband already shared.

“It’s nice to be recognized and I hope we can continue to fulfil people’s expectations,” she said.

“I’m very humbled and honoured to be this year’s recipient of the Indigenous Leader Award through MLBEX and through our community,” Debray stated. “I’m very proud to be looked upon as a leader. My leadership traits come from other great leaders out there. That’s why I would like to share this honour with leaders such as (Flying Dust First Nation) chief Jeremy Norman.”

As for the New Business Award, Debray expressed his appreciation to his staff.

“They always put the customers first and take pride in their work,” he said.

Kassidy Dunsing, owner of Eatery On Main, was named Young Business Leader of the Year and also claimed the award for Female Entrepreneur of the Year.

She said she is “super excited” to receive the Female Entrepreneur of the Year Award.

“There was a lot of other powerful women and inspiring women who equally deserve this,” she said.