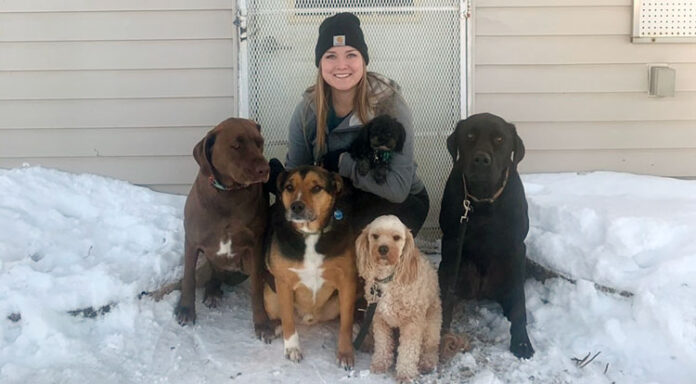 Karlee Mazuren will be sleeping in her own bed this Christmas.

The Meadow Lake area resident and board member with the Meadow Lake and District Humane Society wasn’t sure if that was going to happen when she decided to take part in a sleepover fundraiser at the local shelter, but the generosity of the community allowed her to reach her goal in record time.

“I got the idea (for the sleepover) from our former (humane society) president Jill Doucet,” Mazuren told Northern Pride. “She always held her ‘Extreme Sleepover’ fundraiser starting on Dec. 1 of each year in an effort to raise $5,000 for the shelter. I decided to take it over this year and put my own spin on it.”

Mazuren’s fundraiser, known as the ‘Ultimate Jailbreak’, began Dec. 12 after she completed her final exams at the U of S.

“I took in my five dogs and, at the time, there were five other dogs at the shelter, and – as always – there was a lot of cats,” Mazuren continued. “I didn’t take in any of my own bedding. I went in with the thought of using the shelter bedding, but luckily people brought in stuff for me to use because it was freezing that night. It was -36C with the wind overnight. The dogs are able to enter and exit the building on their own, so every time they went in and out a big gust of cold would come in and hit me.”

Mazuren’s goal was to stay at the shelter until she could raise $5,000 in donations. As it turned out, she didn’t have to stay long – only one night and the following day.

“Lots of local businesses decided to fundraise for me – Studio 3, Ron’s Plumbing and Heating, Martodam’s The Clothing People, Eatery On Main, Gregory Law Office, Nu Line Auto and more. I only had to stay one night – I went in with donations of at least $1,000, and also received private donations. I ended up raising more than $10,000, and that was mainly because of Dean and Tammy Edwards at Nor’Wester and MillTown who matched all the donations made Sunday from 8 a.m. to 8 p.m.”

The money will mainly be used for veterinarian bills.

“Our humane society is 100 per cent non-profit and 100 per cent volunteer-ran,” Mazuren noted. “We have no paid positions – we have a morning volunteer and an evening volunteer. The shelter is also usually always full. We take in dogs from Meadow Lake and the surrounding area, and unfortunately, this year, we couldn’t hold some of our other fundraisers, so this money was much needed. This money will go to vet bills, food, and to help keep the building going.”

Mazuren concluded by saying she is looking forward to participating in a similar fundraiser next year.

“Yeah, I’m looking forward to it – I just hope it’s not as cold,” she said. “After the one night I couldn’t feel my toes or my nose.”